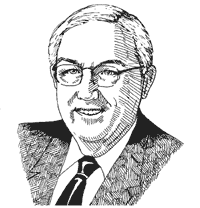 A Tau Pi Phi graduate of Marietta College in 1955, Bob completed a master's degree at the University of Pittsburgh before launching a career in the apparel industry that spanned twenty years. In 1987, he joined The Equitable, now AXA Equitable Life Insurance Company, enjoying tremendous success and earning many achievement awards for his pace-setting sales efforts.

Among those awards is recognition of Bob's tireless community work highlighted by his service to the Boy Scouts of America. During his time with the Scouts, Bob has served as president of the Dan Beard Council, founded the United Food and Clothing Drive and served as its general chairman. Honoring his many contributions, United Way and Community Chest of Greater Cincinnati presented Bob with their "Outstanding Citizenship Award" and the Scouts have bestowed the "Silver Beaver Award" for distinguished service.

Perhaps best known is Bob's work as chairman of the board for the Freestore Foodbank and his founding of the popular fundraiser, the Rubber Duck Regatta. His unceasing efforts established an event which has become an annual highlight of Cincinnati's Riverfest and continues to generate hundreds of thousands of dollars on behalf of the local charity.

For his efforts in support of Freestore Foodbank, Bob has been recognized with the "Bengals Community Quarterback Award", "Feeding America Volunteer of the Year" and, most recently, he was honored with the "Jefferson Award for Public Service" in Washington, D.C. Created in 1972 as the Nobel Prize for public service, the Jefferson Awards honor community and public volunteerism in America.