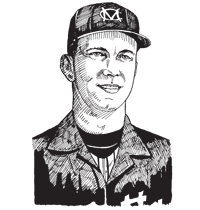 J. Donald “Don” Schaly graduated with Dean’s List honors from Marietta College in 1959 with a degree in Mathematics and having lettered for the legendary Don Drumm for four years on the baseball team and two on the football team.  Returning to his alma mater in 1963, he launched a career that would span four decades, including Hall of Fame credentials for his coaching and enduring respect and appreciation for his skill in athletic administration and education as well.