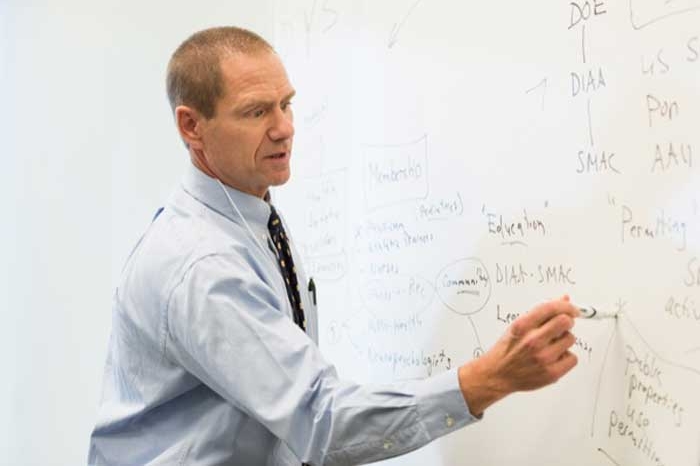 Tom Kaminski ’84 was a serious student who made a strong impression on Paul Spear, the longtime chair of Marietta College’s Athletic Training program.

“He was a bright student. He was one that challenged what we were teaching back then,” said Spear, who retired in 2000. “I can remember that he was always very interested in research, and he loved how we brought the medical aspect to our program back then, which was called Sports Medicine.”

Kaminski’s penchant for quality research and hard work were recently recognized by the National Athletic Trainers’ Association (NATA), which presented him the Medal for Distinguished Athletic Training Research — the organization’s highest honor.

“I was honored just to be nominated because it is such a prestigious award,” said Kaminski, Professor of Kinesiology & Applied Physiology at the University of Delaware. “What makes it even more special is that I share this honor with the past recipients, which include two Marietta College graduates and my mentor David Perrin (Dean of College of Health at the University of Utah), who was my academic advisor for my doctoral dissertation at the University of Virginia.”

Scott Lephart ’83 and Christopher Ingersoll ’85, also protégés of Spear, received the honor in 2002 and 2005, respectively.

“Seems kind of unique to me that three of the most prolific scholars in the athletic training field are Marietta College graduates,” Kaminski said.

Ingersoll, Dean of College of Health and Human Services at the University of Toledo, credits the tough curriculum that Spear demanded of students in the program, and the liberal arts base the College provided.

“Our opportunity to be at a liberal arts institution really helped us as we entered into professional life. As a dean, I have seen first-hand the students who have a broad liberal arts education are some of our best students,” Ingersoll said. “The other thing was the leader of the program, Paul Spear. He expected us to be better than everybody else. He was a pioneer in the field of athletic training. We used medical terminology. We had an exposure in that program that others around the nation didn’t have.”

Lephart, Dean of the College of Health at the University of Kentucky, called Spear a visionary and believes you can trace the success of Kaminski, Ingersoll and himself back to their start at Marietta.

“Paul saw Sports Medicine and Athletic Training as a multi-disciplinary field of study that needed to be comprehensive in nature and embedded in science and medicine, unlike most programs that evolved out of physical education,” Lephart said. “As such, he instilled the need for future educators and researchers to establish our discipline in the health continuum. It is not coincidental that many of us pursued careers in education and research that is reflected in the awards that have been bestowed on those Paul has mentored.”

Kaminski and Thomas Buckley, Assistant Professor at Delaware, are currently working on the landmark NCAA/Department of Defense CARE Grand Alliance study, which is investigating the longitudinal impact of concussions on an athlete’s health. With 38 million U.S. children playing contact sports and close to 3.8 million reported concussions each year, this research can have an important impact.

“Here at Delaware we have 600 student-athletes who have to be baseline tested,” Kaminski said. “We’ve heard the funding will renewed for two more years — it’s a big deal to be selected.”

Kaminski is also working with the National Soccer Coaches Association of America on purposeful heading education — with an end goal of limiting concussions.

“I’m really excited about this research and can’t wait to see how it plays out,” said Kaminski, who was an athletic trainer with the national championship women’s soccer team at the University of Florida in 1998.

Kaminski’s research expectations have mushroomed to the point that this will be his last year as Director of Athletic Training Education at Delaware.

“It’s time for someone else to take the lead and bring in some fresh ideas as our program transitions from and undergraduate to an entry level master’s degree program,” he said.

Kaminski remembers being the new guy at his alma mater when Spear hired him in 1995 as he was completing his Ph.D. at the University of Virginia.

“I’m very appreciative to Paul for giving me that chance and it was a great experience,” Kaminski said. “My Marietta College experience had a profound impact on my life and my career. I went to Marietta to play baseball, but found something special at this small, liberal arts college. I know Marietta continues to make this type of impact on students today.”