Looking at ways to enhance GIS offerings at Marietta College 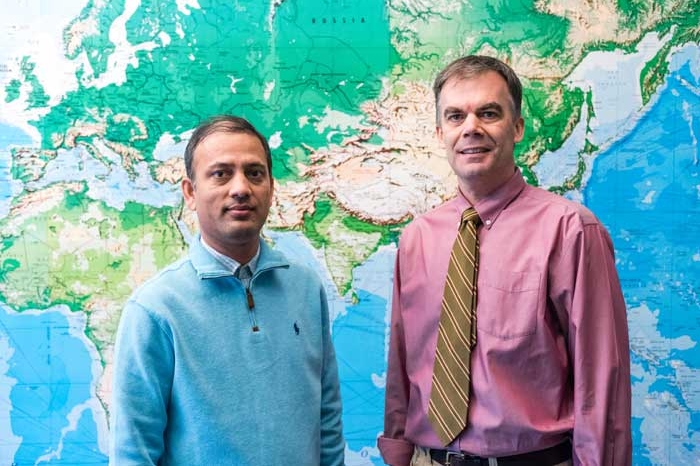 Zach Pope ’17 (Mechanicsburg, Ohio) had a cursory understanding of Geographic Information Systems (GIS), but he wanted to learn more.

Then he heard Dr. Matt Young, Professor of History, planned to teach a course in it and Pope had to give it a try.

“That’s when I really got interested in it,” said Pope ’17, who is majoring in Mathematics and Information Systems. “I was impressed. I think it’s a thought-provoking process because you not only have to compile data, you also have to understand what the data means. This means that the field of GIS is diverse and not unique to any industry. You learn a little bit about everything once you start doing work with GIS, and I think that’s what I like about it the most.”

GIS allows individuals and organizations to capture, store, analyze and share spatial or geographical data. Young believes students with this skill set will be attractive to potential employers. He also learned the course was appealing to a variety of students. The U.S. Department of Labor has labeled geospatial technology as a “high-growth industry.”

“Last spring, I offered the GIS course for the first time and I had 10 students, and all came from different majors,” said Young, who has taught a geography course for 12 years. “I identified GIS as one of these emerging majors, and that led me to get certified in GIS from Penn State so I could teach these classes.”

“Usually, I have a diverse group of students,” Gautam said. “I have been incorporating several areas by introducing small projects from many fields using several governmental and non-governmental data sources.”

Gautam said during the Petroleum Engineering & Geology Industry Advisory meetings in recent years, the group has discussed the importance of GIS — and he has forwarded student resumes for job openings.

“In the past two years, a local company has hired at least one student each year from my class for a full time or an intern position,” Gautam said. “I hope that continues to grow.”

Young said his focus on social science application, history and marketing. Young’s first class took census data and turned it into a map that they shared with the class and discussed how their analysis impacted communities or organizations.

“First, they learned how to make their own maps using the software … that’s pretty cool right there,” Young said. “I let them pursue their own interests and it turned out better than I could have planned.”

One student looked at forest fire coverage in national parks, while one looked how bear hunting had changed over time in Pennsylvania. Another student analyzed race in Pittsburgh and how neighborhoods in the downtown area have changed in relation to urban renewal.

“The way we are approaching it is GIS is one skill in your toolbox,” Young said. “That’s what we do so well at Marietta. We provide students with such a diverse education that they have so many skills that are attractive to employers. I love seeing students take the class and carry over the skills into their major.”

Young has also spoken to a number of alumni who are utilizing GIS in their profession or are looking for people who they can add to their team that have experience in it.

“I hope some of our students will recognize the possibilities,” Young said.

Bret Allphin ’01, Development Director at Buckeye Hills-Hocking Valley Regional Development District, said learning GIS helped him, but it was much more than that.

“Marietta College’s liberal arts approach is powerful and complements every major,” he said. “If you have the aptitude to use GIS, it is a very powerful combination. Many places are using this now because you may have to consider economic trends or you may need to collect data in the field. GIS gives you a way to track this digitally and then use the information in a productive and valuable way.”

Pope believes he has a future in GIS, and had a chance to use some of the skills he learned in Young’s class during his summer internship with Eureka Midstream, which owns and operates natural gas lines.

“I am definitely considering GIS as a career choice,” Pope said. “There are so many possibilities, including departments of transportation, oil and gas companies, environmental groups or committees, parks or other recreational industries, or any company that analyzes data using maps.”

That’s why Young hopes he can grow the GIS offerings at Marietta.

“If this technology had been around when I was in school, I may have taken another direction,” he said. “This is a real opportunity for Marietta College in this field and I’m working with other professors, like Sara Alway-Rosenstock in Graphic Design and Dave Brown in Biology.”

“Dr. Young’s class was a great experience, and I think I was able to do a lot,” he said. “Everything we learned was hands-on. There was hardly any lecturing, and I liked that. The best way to do (GIS) is to just do it.”