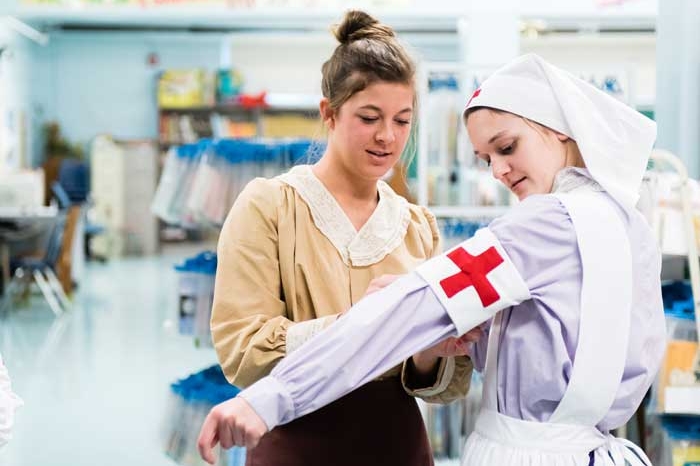 Dressed in a denim jumpsuit and red bandana — in the same vein as Rosie the Riveter — Hannah Offenberger ’17 (Waterford, Ohio) asked a group of Harmar Elementary students on Thursday (December 1st) if they knew where they were and what they’d be doing.

“That’s right,” she responded to one of the children, “we’re in 1917 America, in a munitions factory.”

“Their presentation is ‘Women on the Home Front’ and it is a collaborative effort with The Castle (in Marietta) to commemorate the anniversary of the U.S. entering World War I,” said McCoy Associate Professor of Education Dr. Cathy Mowrer. “The students are in my Social Studies Methods Class. They planned the entire program, wrote the script and will stay in character during the entire presentation.”

The Marietta students were dressed in period costumes that ranged from Red Cross volunteers, to housewives and a munitions factory worker. Local history re-enactor Jane Young made the costumes that each student wore, according to Qualls.

“I’m portraying Lucille, who is on the home service committee for the Red Cross,” Qualls said. “We first introduced our characters to the children (on November 29th), so the children had an idea of who we are. This experience has really put into perspective how much work goes into creating these types of assemblies.”

After the nearly 300 Harmar students entered the school’s gymnasium, the Marietta College students presented a skit of a community meeting that illustrated the types of discussions that were taking place on the home front during World War I. During the meeting, the women spoke of what they could do to support the war efforts overseas. After each character was introduced, they announced the roles they would take on to support American military forces.

Once the initial skit was over, the Marietta students broke into individual stations so they could work on a more individual basis with the children. Offenberger’s role in the munitions factory was to load bullets, which, for the presentation, involved a small amount of sugar being loaded into fake shell casings. Each child was able to measure the fake gunpowder and fill the casing. During her presentation, Offenberger described her life before and during the war.

“Before I worked here, I stayed at home,” she said. “But now that the war has started, I come here to make guns, bullets, bombs, or whatever is needed. … I get paid less than half of what my husband was paid when he worked here and I will return home once the war is over.”

Down the hall, Fleming and Vodopich worked with the Harmar children ripping and rolling cloth into bandages.

“These bandages will be used to help care for wounded soldiers in the field,” Fleming said.

Kyle Yoho ’12, Education Director at The Castle, portrayed one of the two soldiers during the assembly.

“This is the first time I’ve worked with the Education Department on a project like this,” he said. “I’m serving in an advisory position. I’ve done living history for a long time. I sent out an advisory about the anniversary of the U.S. involvement in World War I. I think it’s definitely important for alumni to show current students that they can work in a field that you want to work in, as opposed to just getting by with any job they can find."