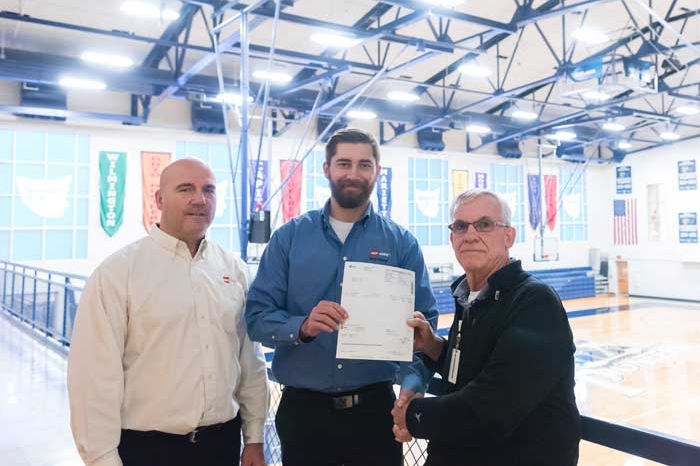 In addition to being more environmentally friendly, Marietta College’s efforts to reduce its carbon footprint is paying off financially.

Earlier this month, a representative from American Electric Power Ohio’s Continuous Energy Improvement program presented a $6,300 check to the College.

“The CEI program focuses on behavioral and equipment-based changes to improve energy efficiency,” says Sam Day, a representative for CEI. “The program efforts were led by Fred Smith and Paul Miller, along with numerous faculty, facilities employees and students. Through continuous monitoring of building schedules and campus equipment operations, the Energy Team was able to achieve substantial improvements in energy efficiency. The 15-month CEI program resulted in a net energy savings of over 300,000 kWh of electrical energy usage; this is on top of the over 230,000 kWh of energy savings generated from equipment upgrades that have been installed since 2012.”

Day added that the campus’ energy conservation efforts have realized more than 500,000 kWh of annual electricity savings, which is the equivalent of removing 78 passenger vehicles from the road for one year or providing electricity to 55 homes for that same amount of time.

The College invested in making the campus more energy efficient by improving the HVAC systems in the Lindamood/Van Voorhis Boathouse, Mills Hall, the Physician Assistant Building and the President’s House, and by upgrading lighting systems in freshman housing, the Alma McDonough Auditorium, the Dyson Baudo Recreation Center and during the construction of Harrison Hall.

Additional efforts to reduce electricity use are in progress, Smith said, including turning off the lights in Ban Johnson Arena for a certain number of hours per day, with the annual goal of saving about 70,000 kWh per year.