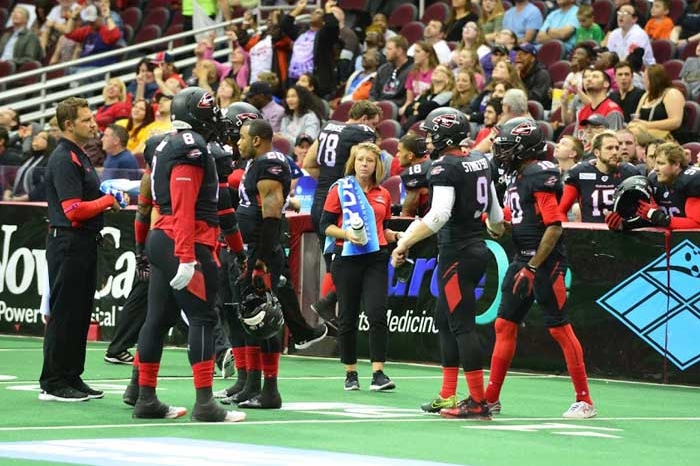 She had experience working with football players as a student athletic trainer at Marietta, and she interned for Sports International, which allowed her to work with the NFL’s New York Jets and Giants.

But her first day as an athletic trainer with the Arena Football League’s Cleveland Gladiators — the first female athletic trainer in the league and fourth in professional football — was still an eye-opener for Cline.

“There’s about 30 guys I work with on a daily basis and I’m the only female on staff except for the front office, so I was pretty cautious at first,” she said. “The players have been phenomenal. They don’t look past me because I’m a female. Instead, they have shown me a great deal of respect and I think I’ve proven my worth.”

Her supervisor, Jeff Lambert-Shemo, was impressed by Cline from the first day they met.

“Aimee jumped in on day one ready to go,” he said. “She’s doing a great job of maintaining herself as the professional medical staff among the team and the coaches, and she has great relationships with everyone.”

Cline joined the Gladiators in her final weeks of graduate school at Ohio University, where she graduated in April with a Master of Science in Athletic Training. There were plenty of challenges in the early days as she studied for finals and attended classes, while still making it to practice in Cleveland.

“There were several times that I wondered if I had bitten off more than I could chew,” said Cline, who was named the Graduate Student of the Year for OU’s Athletic Training program. “I was very stressed. During my first month, I was commuting twice a week down to Athens. Jeff was willing to work with my schedule.”

She has since settled into her new role and she feels a connection with working in a professional football environment.

“I sort of feel like I’m breaking the glass ceiling on professional football,” said Cline, who traveled to Australia with Marietta’s Athletic Training program in 2013. “Now that I’m in professional sports, I’m not looking to leave it. [I] have to look at the possibility of a family and settling down one day, but I like the aspect of working with one team and not a whole school or multiple programs.”

Her success in the field does not surprise one of her former Marietta professors.

“Aimee was one of the top students in the Athletic Training program. Her personality set her apart from other students,” said Sam Crowther, Chair of Marietta’s Athletic Training program. “Despite the grind of any season, Aimee was always positive and demonstrated a strong work ethic. She didn’t need to be told what to do. She simply did it. She was willing to go the extra mile with our athletes and our program.”

She believes her time at Marietta was the perfect preparation for graduate school and now her career.

“I would not personally be here without the experience in Marietta’s Athletic Training program,” said Cline, who was President of the Athletic Training Student organization. “Even with all of the self-doubt that I felt at first, the professors were there to mentor me.”