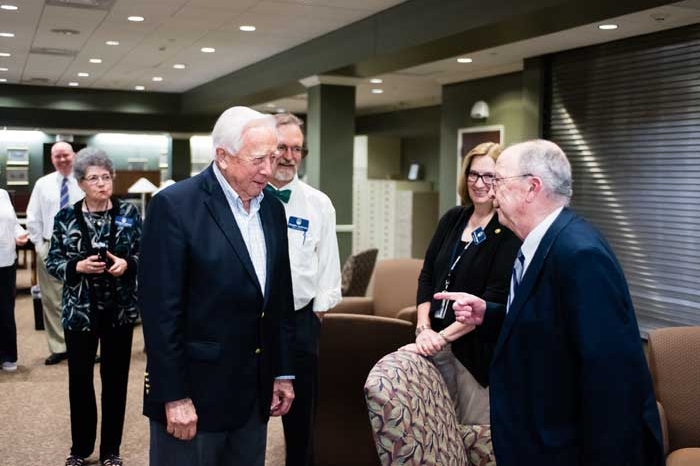 A figure closely tied to the establishment of the city of Marietta and of Marietta College is the focus of historical author David McCullough’s forthcoming book.

The two-time Pulitzer Prize-winning author visited with members of Marietta College’s History Department and Legacy Library recently to announce his latest project, which will heavily rely on the library’s Special Collections.

The focus of his book will be the Rev. Dr. Manasseh Cutler, one of the original shareholders of the Ohio Company, which settled the Northwest Territory after the American Revolutionary War. Cutler lived from 1742 to 1823.

McCullough won Pulitzer Prizes for his books, Truman and John Adams, and won National Book Awards for The Path Between the Seas and Mornings on Horseback. He has also been awarded the Presidential Medal of Freedom.

McCullough first became interested in Cutler when he was asked to speak at Yale University’s conclusion to its seven-year Yale Tomorrow fundraising campaign. The focus of his talk was on three men affiliated with Yale College: Ezra Stiles, who was the president of Yale during the Revolutionary War; John Trumbull, the renowned Revolutionary War painter who donated works to Yale; and Manasseh Cutler.

“And that’s when I got hooked on Manasseh Cutler,” McCullough said. “… Then I got into the incredible magnitude and importance of the Northwest Territory — the size of it; the richness of it; the incredible new lift of spirits it gave to the country just knowing that was out there, particularly to those veterans; and I began to find out about people like Joseph Barker and, reading some of these diaries and memoirs, I thought, ‘Whoa, this is really great material and a great American story.’ I’m very pumped up about this. And then to find that it’s all here at one university, one college!”

Dr. Douglas Anderson, Director of Legacy Library, said McCullough and his research assistant, Michael Hill, who is also a published author and historian, will visit Marietta College’s campus for research several times over the next two years.

“We know how excited Dr. McCullough is about his latest research topic and will do our best to accommodate his and Mike’s needs during their time in Marietta,” Anderson said. “This is also an exciting time for Marietta, as Manasseh Cutler is an important figure in our local history.”

“It will be interesting to see the perspective that he has on early Marietta and Manasseh Cutler, who I think is an interesting guy,” said Dr. James O’Donnell, Professor Emeritus of History.  O’Donnell is currently researching Rufus Putnam, another member of the Ohio Company, for a book he is writing. “Manasseh is always interested in Manasseh.”

During the gathering, McCullough thanked Special Collections Associate Linda Showalter for her recent and future support of his research. The two looked over some of the historical paintings of people and places that will come up during McCullough’s research.

“I’m going to come out here as often as possible,” McCullough said. “You’ve got to go to the place where it happened. You’ve got to go where he or she grew up and get the impact, the influence of the land, the setting, the scene; you can’t just say, ‘Oh I know what it’s all like out there,’ because it isn’t what you imagine; I found, in most cases, it’s always bigger.”