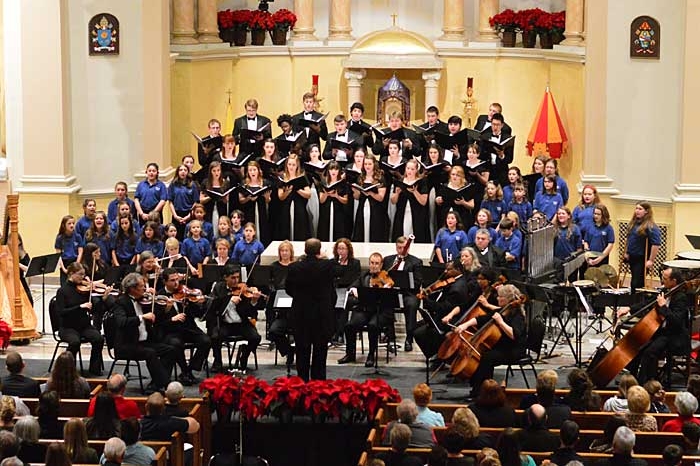 Every December, Marietta College’s Edward E. MacTaggart Department of Music is busy offering the campus and community multiple opportunities to get into the holiday spirit.

This year is no different.

On Sunday, December 4th, Marietta College’s Oratorio Chorus will present the 90th performance of George Frideric Handel’s Messiah. The concert, which is free and open to the public, starts at 7:00 p.m. at the Basilica of St. Mary of the Assumption.

The Oratorio Chorus, a group that consists of a mixture of community members and students, will be entering their 163rd performance. Messiah started at the College in the fall of 1926 when music director Gerald Hamilton arrived singing the Christmas portion of the performance. Since then the Messiah has grown into a tradition giving community members and students a chance to showcase their talents and their love for music.

On Saturday, December 10th, the Merry TubaChristmas program is back for its 12th year. The concert will begin at 4:00 p.m. at the Alma McDonough Auditorium.

Area tuba, baritone and euphonium players are invited to participate. Merry Tuba Christmas is free and open to the public.

Merry Tuba Christmas is celebrating its 42nd anniversary. Created by Harvey Phillips, Merry Tuba Christmas concerts will be presented in more than 250 cities throughout the United States and in several foreign countries. Phillips was inspired to create Tuba Christmas as an annual event honoring his teacher, the late great tubist, William J. Bell (born Christmas Day, 1902).

And at 7:00 p.m., Sunday, December 11th, the eight annual Christmas with the Concert Choir and Orchestra is the program’s “thank you” to the community. The concert will be at the Basilica of St. Mary of the Assumption. For the second year in a row, the Marietta Children's Choir will be perform a few songs and then join the Concert Choir.

Each of these performances is free and open to the public.