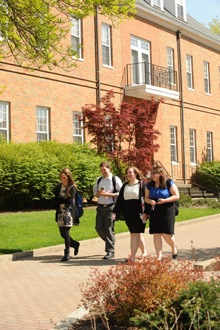 Marietta College is no newcomer to national rankings.

From a baseball program that has won six NCAA Division III National Championships to a Petroleum Engineering Department that is ranked among the best in the U.S., Marietta has a history of garnering this type of recognition.

On Wednesday, July 24, Forbes.com has once again recognized Marietta College as one of the best colleges and universities in the nation.

Marietta is ranked 391st overall in this year’s Forbes’ ranking of the 650 best colleges and universities in the nation. Marietta also ranks 19th among all Ohio four-year schools and 90th in the Midwest.

The ranking places Marietta between George Fox University (390) and the University of Evansville (392). Factor in all four-year colleges and universities and Marietta ranks in the top 10 percent in the nation.

According to Forbes.com, The rankings are based on five general categories: post graduate success (37.5 percent), which evaluates alumni pay and prominence, student satisfaction (22.5 percent), which includes professor evaluations and freshman to sophomore year retention rates, studentdebt (17.5 percent), which penalizes schools for high student debt loads and default rates, four-year graduation rate (11.25 percent) andcompetitive awards (11.25 percent), which rewards schools whose students win prestigious scholarships and fellowships like the Rhodes, the Marshall and the Fulbright or go on to earn a Ph.D.

Marietta has traditionally done well in rankings, especially among the best in the Midwest for U.S. News and World Report.