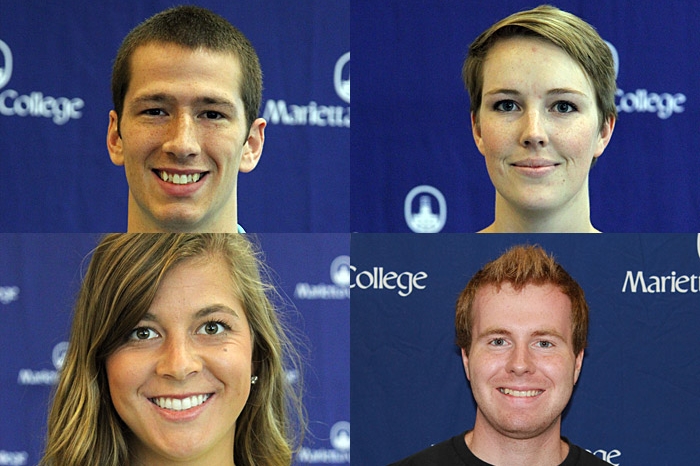 After being awarded scholarships to conduct research throughout the year, four Marietta College students made presentations at the 2017 Ohio Space Grant Consortium (OSGC) Student Research Symposium at the Ohio Aerospace Institute in Cleveland recently.

Attending the symposium and presenting the findings of their research or educational activity was another requirement of receiving the scholarships for the Marietta students.

Mullet said he was compelled to apply for the scholarship so that he would have the opportunity to research and present on something he believes could have future potential in the local area.

His research, “Exploring Alternative to Hydraulic Fracturing,” looked at the potential for waterless fracturing in Marcellus and Utica shale wells.

“Essentially, I looked into the economics and environmental impacts of using waterless methods to fracture shale wells versus the tradition hydraulic fracturing done with water,” he said. “The main reason I chose to do this research was because of the public complaint of oil and gas companies using too much fresh water in their hydraulic fracturing operations, and I had previously done some reading and research on alternatives to water for oil/gas completion methods.”

Besides enjoying the experience of researching and learning about a topic that interested him, Mullet said that presenting in Cleveland was a fun experience that challenged him to easily convey his findings.

“Most of the people who saw my presentation did not have much of a background in the oil and gas industry,” he said. “Because of that, it challenged me to think of creative ways to explain my research in a way that could be easily understood. A lot of other scholars and OSGC coordinators came up to me throughout the day to ask me more about my research and hydraulic fracturing. It was great to have the opportunity to talk about the oil and gas industry and the perception of hydraulic fracturing with engineers from other disciplines.”

Similar to Mullet, Starkey applied for the scholarship for the chance to conduct her own out-of-class research on a topic she was interested in.

“Being able to make a project completely mine was a great experience, and now I can say that I’m published,” she said.

When it came to presenting her research, “Locating Abandoned Wells: Using Historical Documents and Records with Practical Physical and Technical Methods,” Starkey may have experienced a bout of nervousness, but she said it was an overall great experience.

“There were so many smart and dedicated students presenting that it was overwhelming,” she said. “Presenting for a NASA scientist was a little stressful, but in the end, I had fun and wish I could go again next year.”

While Millet and Starkey made oral presentations, Drennen presented a poster based on his research “Development of Formation Evaluation Program to Test Lithology Crossplot Hypothesis.”

Following the requirements of the scholarships awarded to Education students, Tornes presented a poster based on an educational unit she created entitled “Self-Sustaining Ecosystems.”

Tornes’ reading unit incorporated NASA information and helped students learn about ecosystems through reading a passage, completing comprehension questions and discussion. After thinking of different ways to remember the vocabulary, the class would use a word wall throughout the week to reference the words as they talked about ecosystems and what they required.

“Students discussed needs and wants within an ecosystem and the type of ecosystem that we could build on a potential lunar station,” Tornes said. “Students sorted organism cards (producer, consumer, and decomposed) and then created posters showing their ecosystems for the lunar station. We had to think about the food chain as well when we were creating our ecosystems. Students discovered that they could not just have consumers or just producers. By the end of the week, we were ready for the creation of our self-sustaining ecosystem. With donations from We Luv Pets, students were able to make a class model incorporating live fish, snails, worms, and crickets.”

Tornes saw receiving the scholarship as an opportunity to show others how much the Education Department at Marietta has taught her.

“I have learned that you can embed other subjects throughout the entire day,” she said. “During reading, you don’t just have to focus on reading. Rather, you can make it fun and interesting by touching on other subjects.”

While in Cleveland, Tornes enjoyed getting to listen to the variety of research being presented, including that by her Marietta peers, meeting a lot of influential people, and learning more about what NASA has to offer the school systems.

Overall, the interest and investment the four Marietta students had in their research showed and paid off in Cleveland.

“The students all made excellent presentations and the trip was very successful,” said Craig Rabatin, Associate Professor of Petroleum Engineering and Geology.