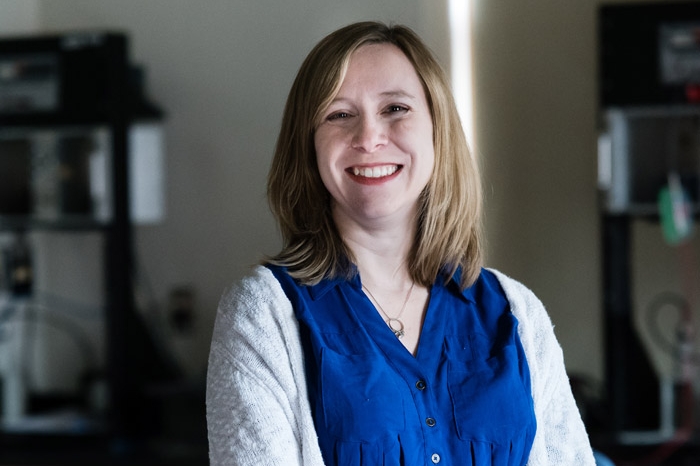 Behind the closed doors of the research laboratory is where Meredith Rogers Dubelman ’07 is in her element.

As an Advanced Lead Engineer with GE Additive, Meredith is still getting her hands dirty doing research and development. OK, maybe her hands don’t get as dirty these days as much of her work is done with 3-D printing technology.

“I love being in the lab, working with the machines and making my own formulations,” she said. “It’s hands-on work and that’s what I prefer. That’s the way my mind works. I remember that I learn faster if I can put my hands on it.”

Meredith, who earned a Bachelor of Science in Physics from Marietta, was back on campus in March as the featured speaker at a Physics Colloquium. She discussed the “Next Generation Technology in Aviation,” as well as her time as a graduate student at Purdue and her work with GE — where she was recently promoted from a post in aviation.

“This opportunity came up and it was a nice step in my career and I get to work on something awesome,” said Meredith, who lives in Liberty Township, Ohio, with her husband Steven — who also works at GE. “One of the major things we look at is the fluidity of a slurry system. I can look at numbers all day, but when I stir it myself, I can feel it and decide what works and what doesn’t.”

Meredith’s love of physics and eventually her decision to earn a Ph.D. in Material Science & Engineering, were harnessed at Marietta College.

“What ultimately led me to what I’m doing today is being able to work with Dr. (Dennis) Kuhl on surface science work,” said Meredith, who learned about Marietta from her sister Megan ’05, who earned a Bachelor of Science in Environmental Science. “I had no idea what I was doing. He helped guide me through it. … At the time I didn’t realize how unique it was until I did the REUs and the grad school experience. It’s more of a realization that it was incredibly helpful and the push I needed to move forward.”

Dr. Kuhl, Professor of Physics, said Meredith is a great example of a person who was very persistent in pursuit of her goals.

“When she came to Marietta, she did not initially have a Rickey Scholarship in physics, but she earned one after her first year,” he said. “When she graduated, she knew she wanted to get a graduate degree and do research, but she first spent a year doing computer work in the nuclear industry at Westinghouse. That time helped enforce her long-term plans, and gave her time to find the interdisciplinary program in materials science and engineering at Purdue, where she completed a Ph.D.”

Kuhl had a motive for inviting Meredith to speak at a Physics Colloquium.

“One of the reasons I wanted to have Meredith speak was to introduce our current students to the field of materials science, and the application of it to the industry where she now works,” he said. “This is an important, growing field of research and development with which most undergraduate students are not familiar. Also, having that introduction to the field come from one of our successful graduates makes it personal for current students. They can learn about experiences she had along the way, and envision themselves accomplishing similar things.”