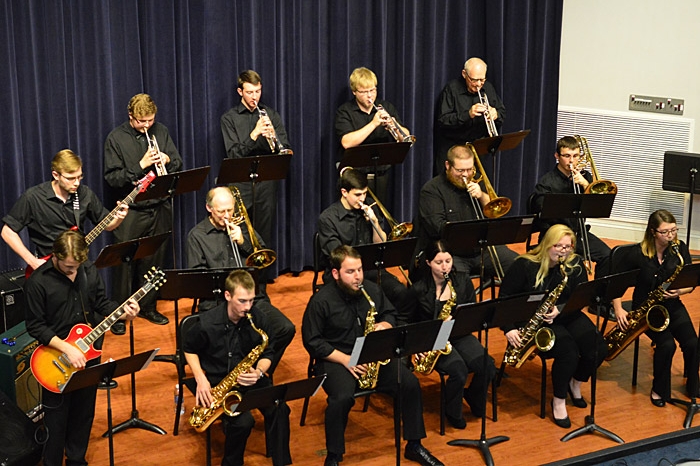 The concert is free and open to the public, however a free will donation will be taken during the concert.

The Jazz Combo will be performing two original compositions that were written by two students — Matthew Pietzcker ’20 (Pataskala, Ohio) and Logan Reynolds ’19 (Vincent, Ohio). Dr. David Torbett, Marietta College’s Israel Ward Andrews Professor of Religion, has also written an arrangement for the combined performance of the Jazz Combo and FloodStage.

The other music ensemble on the performance is FloodStage, which is made up of singers in other Marietta College choral ensembles, both concert choir and women’s choir.

“While the name is the same as an ensemble the College has previously had, it is an entirely different ensemble, performing a different genre of music. Instead of singing jazz, FloodStage is a contemporary a cappella ensemble, performing arrangements of modern pop and rock songs, completely a cappella,” Dougherty said. “Most people know the name Pentatonix. FloodStage sings in a very similar style. We have a vocal percussionist, (KeXin) Coco Shao, who, coincidentally, is also a percussionist in the College band.”

Professor Marshall Kimball, Music Department chairman, said, “This concert is one that is less formal than many concerts. The audience can really get involved in this music with lots of musical styles performed and music from differing eras in the development of jazz and popular music. I am very pleased with the direction our jazz and popular music ensembles have taken this year. The educational opportunities afforded by these two ensembles are fresh, highly educational and challenging. This concert will be a wonderfully musical and uplifting experience for all in attendance.”