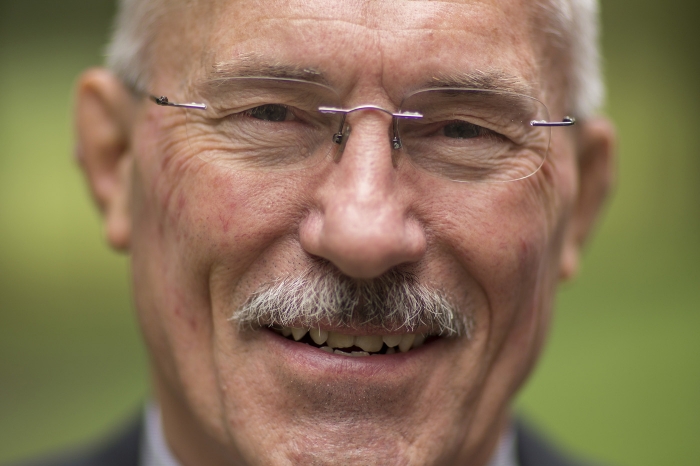 Marietta College’s campus looks significantly different from the campus Dan Bryant first visited in spring 2001 after he passed the first round of interviews for the open Vice President for Administration and Finance position.

Those improvements, the teamwork within Marietta leadership it took to adapt to the College’s needs, and his successors within the Office of Administration and Finance stand out when Bryant reflects on his many points of pride about his time in leadership at the College. At the end of 2016, Bryant officially retired as the Vice President after serving that office for 15 years. He and his wife, Evy, plan to travel, volunteer in the community and in their church, and spend plenty of time with grandchildren.

“When I arrived at Marietta in July, Dan was one of the first members of the campus community to extend a warm welcome to Judy and me,” says President William N. Ruud. “Dan is a valuable member of the Marietta College family and his daily presence will be missed. I know he and his wife, Evy, will continue making positive impacts on the greater Marietta community and will remain valued supporters of the College. It has been an honor to work with him.”

Prior to coming to Marietta, Bryant was the Chief Financial Officer for the United Arab Emirates’ nationwide community college system. After working in Abu Dhabi for a year, he knew he wanted to return to the U.S. He saw a job posting for a Vice President’s position at a small college in Ohio that just happened to ring a bell.

“I’d known about MC since 1962, because my seventh grade English teacher, Jeanette Henne, was a 1960 MC alumna,” Bryant says. “She was a very good teacher and person, and she was a positive influence. I can't explain why an 11-year-old kid who’d never been to Ohio remembered Marietta College, but I did.”

He was offered the position after being interviewed by the search committee and during a campus-wide interview. He officially began working at Marietta in July 2001.

“I recall vividly September 11, 2001, when (former Director of College Relations) Miriam Bailey interrupted a Cabinet meeting to tell us that a plane had flown into the World Trade Center,” Bryant says. “As I reflect on the above sequence of events, I can’t help but believe that God was watching over me, and has been ever since. Since 2001, MC and the Mid-Ohio Valley has become part of my identity. It’s home for Evy and me. There is no better place.”

“The best an administrator can hope for is to leave his/her employer in a better position than when he/she first arrived,” Bryant says. “When you consider the leadership we have in place for finance, facilities, human resources, information technology and auxiliary services, Marietta has highly capable stewards for its four major resources: money, buildings, people and technology.”

Bryant expresses gratitude to the many people on and affiliated with campus.

“It’s difficult to recognize or thank people without inadvertently missing someone,” he says. “However, I will say that any successes the Cabinet or the Board or my presidents or I have had were not our own doing. Rather, they were the work of those who, every day, supported senior administration — persons like Mark Miller, Jason Mader, Vicki Ford, Nancy Schwendeman, Wendy Thieman, Jeanne Arbuckle — the names read like the campus telephone directory. Senior officers were lucky enough (most of the time) to hire good people who then carried Marietta College on their shoulders.”

Bryant acknowledges that the team mentality on campus had a great deal to do with the achievements the College has made since his arrival in 2001. Friends and colleagues held a retirement party for Bryant earlier this month to celebrate his time at Marietta.

“I’m humbled by the recognition,” Bryant says. “The persons who really deserve recognition are those who supported my work for the past 15-plus years, and there are many. Whatever we accomplished is creditable to them. Marietta College hired me to steward its resources and, although not perfectly, I did my best to leave Marietta in better condition than when I arrived. I pursued stewardship with as much commitment and integrity as I could muster. Marietta College gave me a role in an important mission. For that, I’m thankful.”