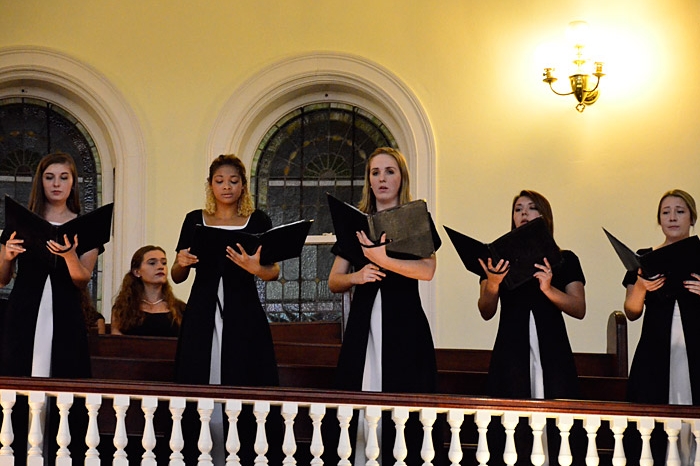 The concert, which is under the direction of Dr. Jay Dougherty, will feature the Concert Choir, the Women’s Choir and Floodstage — a contemporary a capella ensemble.

The concert is free and open to the public. Doors open at 7:00 p.m. and seating is on a first-come, first-served basis.

All three ensembles are made up of students from nearly all majors on campus.

“It’s great to have dedicated singers from other majors. It shows how music is important to everyone, not just those that major in it,” said Dougherty, Director of Choral Activities. “You wouldn’t believe the sound these singers can make. They sing difficult music and they sing it well.”

Dougherty said he is excited to share the hard work the ensembles have been doing with the community.

New to this concert is Floodstage. While they’ll be performing most of their repertoire during the Spring Jazz Concert at 7:30 p.m., Tuesday, April 18th, in the Alma McDonough Auditorium, they will also be featured singing three songs at the choir concert — including one new song that won’t be performed on the 18th.

“They may sing in a contemporary a cappella style, but they are singing!” Dougherty said. “Plus, all members of Floodstage are also singers in one of the other choirs.”

For more information, contact the Edward E. MacTaggart Music Department at (740) 376-4696 or Dr. Dougherty at jay.dougherty@marietta.edu.