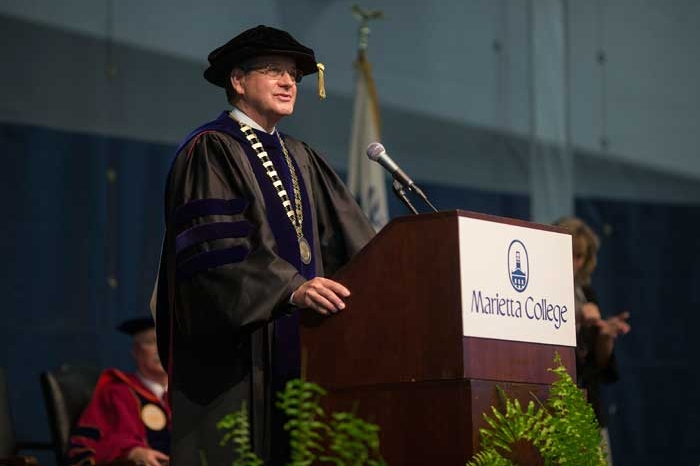 Over the past 100 days, Dr. William N. Ruud has inspired the current student body, faculty, staff, alumni, leadership team and the surrounding community with his affirmative approach to improving the state of the College, as well as implementing his vision of Marietta’s future.

“Joining our faculty and staff within our academic procession, we welcome members of The Long Blue Line that span from the Class of 1948 to the Class of 2016,” Fenton said. “We are also honored to have delegates appointed by their respective campus presidents who represent 45 institutions of higher learning. Among them are three former Marietta College presidents. Representing the University of Kansas is Lauren Wilson; representing Harvard University is Jean Scott; and representing Marietta College Cotton Society is Timothy Cooper.”

With Mr. Fenton, Board of Trustees Vice Chair Patty Kral Zecchi 71 and Co-Chair of the Presidential Search Committee Grant Callery ’68 presented the Charge of Office to Dr. Ruud.

“As I stand here now, it couldn’t be any clearer that today’s alliance of Bill Ruud and Marietta College was destined to be,” Fenton said. “And now, Dr. Ruud, it is my high honor and distinct privilege to present you with the College charter, invest you with the Chain of Office, and introduce you to all those assembled here as the 19th President of Marietta College.”

President Ruud thanked the members of the delegation for joining him on this special occasion, and recognized the team involved in preparing the Inauguration ceremony. He gave special, heartfelt thanks to his family, especially his wife, Judy.

With the same energized spirit he arrived on campus with in July, Dr. Ruud began laying out his vision for the College and how it compliments Marietta’s liberal arts approach to education. His focus utilizes both the liberal arts core as well as STEM disciplines to best prepare current and future students to make tremendous gains in their professional and personal lives.

“Today, I began by discussing technology and change. Our students’ needs will change; businesses, communities, non-profits, governments, higher education institutions, and other employers will seek individuals with a strong work ethic, solid core of talent, and the ability to change,” President Ruud said. “Change is good. We must embrace it while continuing to build our solid partnerships and forge new and more successful partnerships to meet those demands ... today and into the future.”

President Ruud has clear goals for Marietta College, and knows that hard work and positive energy by all involved will attain and surpass those ambitions.

“As we move forward, let’s remember our shared passion for education; our belief in our students and their impact on the future; and the successes that will be Marietta College’s for years to come,” President Ruud said. “I accept the responsibility and challenge for Marietta College. I promise to do everything possible to work collaboratively with you to uphold and enhance the legacy of this magnificent institution.”