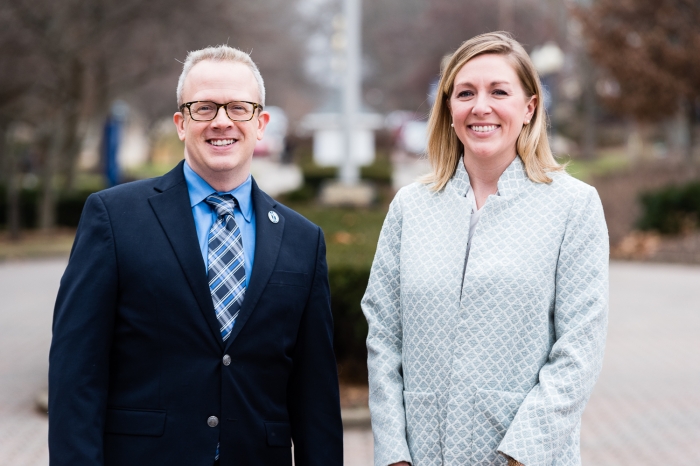 When Dr. Alane Sanders first learned she was selected to be a McCoy Associate Professor of Communication, her first instinct was to tell her students.

“I felt we had earned the honor together and I wanted them to feel that sense of accomplishment,” she said.

Just before winter break, Sanders and Dr. Robert McManus, Associate Professor of Leadership Studies and Communication, were informed that they were awarded the 2017-18 John G. and Jeanne McCoy Teaching Excellence Professorships. Established in 1993 as part of the McCoy Endowment for Teaching Excellence, the four-year designation is the most esteemed teaching award at Marietta College.

It is the second time in his 12-year Marietta College career that McManus has earned the distinction. Only two other Marietta professors have won the McCoy twice.

“I thought it was a long shot to get it twice and I realize how very fortunate I am to receive this honor,” said McManus, who is currently working on two new books, Ethical Leadership: A Primer and Leadership and Communication: Theory and Practice. “There is a tremendous amount of good teaching on this campus, and I am aware that there are people who have not been selected for this honor who are more deserving.”

After receiving a nomination for the award, both McManus and Sanders underwent an extensive review by faculty from sister colleges in Ohio that included observation of their classes and interviews with their students.

“I am surrounded by truly outstanding educators every day here at Marietta, so it felt like an honor just to engage in the process,” Sanders said. “There was certainly a feeling of vulnerability when going through the process — you share this portfolio that includes everything you strive for as a teacher, open the doors of your classroom for observation, and invite the feedback of the committee. That vulnerability, though, encouraged a healthy reflection on what I was doing well and where I still wanted to grow.”

Sanders has known she wanted to teach since she was a little girl, though it wasn’t until she took an elective communication course as an undergraduate student that she realized what and where she wanted to focus her career.

“I thought the course would be a side-note to another degree, but I had this moment when everything fell away and I could see clearly that it was at the heart of every human experience and precisely what I wanted to spend my life learning about and sharing with others,” she said. “I promptly switched majors, then applied to graduate school in Communication, and that path eventually led me here.”

McManus is the first Marietta professor to earn the distinction in two different disciplines. He was an Associate Professor of Communication and Media Studies in 2007 when he earned his first McCoy award. That year, he began a teaching fellowship for the McDonough Center, shifting his teaching focus from communication to leadership studies. When McManus first earned the McCoy Associate Professorship, he was a young, hip and energetic educator who could easily relate to his young students. Not only have the subjects he teaches changed since the last time he earned the McCoy distinction, so has the type of rapport he has with his students.

“I’ve aged. In some ways, I don’t have the same relationship that I once had with my students. I don’t have that natural camaraderie that I once had when I was closer to their age,” he said. "Frankly, now I’m much closer to their dad’s age. So my teaching has changed as I’ve changed. But I hope that I’m a better teacher today than I was 10 years ago. Hopefully, with a little more age comes a little more wisdom."