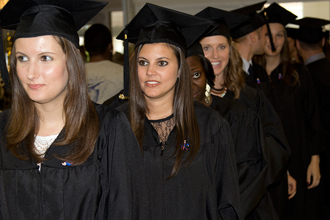 As Marietta College welcomed its 10th graduating class of the Master of Science in Physician Assistant Studies on Saturday (July 13), it also said good bye to the founder of the program — Dr. Gloria Stewart.

The commencement ceremony for 36 graduates was Stewart’s final assignment as the program’s director and now she said she’s ready to move to Florida.

“I still have a lot of packing to do,” she said.

During his charge to the Class of 2013, President Joseph W. Bruno acknowledged Stewart’s many contributions to the program and to the Marietta campus.

“One vision of an effective leader is that he or she is irreplaceable. And make no mistake, it will be a challenge to replace Dr. Stewart,” Bruno said. “But another, better vision is of a leader who has prepared such a strong foundation for success that the program will continue to flourish and grow even after a leadership transition. I am convinced that we are in that fortunate position, and all of us are deeply grateful to Dr. Stewart for putting us there.”

A number of academic awards were presented during the ceremony.