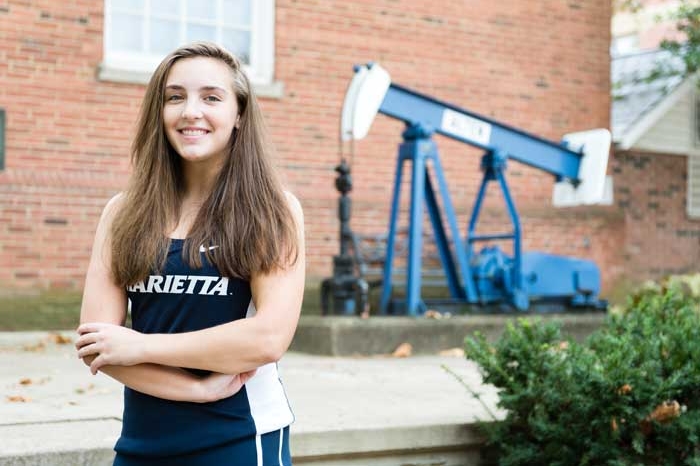 In middle school, her older brother, Julian, died at the age of 22. During the first two years of high school, she missed weeks of classes because of an illness. And just when everything seemed to be fine, her life was shattered again.

“She’s a tough cookie,” says Andra Riffle, Lily’s mother. “I think the hurdles that she faced earlier helped her cope and stay positive.”

Sixteen months ago, Lily was enjoying the summer before her senior year at Hudson High School, training for the upcoming cross country season and starting to think seriously about her college plans. Then she was struck by a car while crossing the street in a crosswalk near Hudson Springs Park. Lily broke the tibia, fibula and ankle of her left leg.

“I didn’t see the car and I don’t think the driver saw me,” she says. “I had a titanium rod put in to help stabilize my leg. It will be there for the rest of my life.”

After five days in the hospital and more than two months on crutches, Lily never wavered on returning to running.

“She had maybe one little moment when she was still in the hospital where she was upset,” Andra says. “She’s just tough and independent. I honestly can’t believe she’s running again. I saw the X-ray and I know how bad it was. Her fibula is still just a bunch of pieces of bone.”

Her return to competitive running came this fall with the Marietta Pioneers.

“Lily brings a unique energy to our team, no matter how she is feeling,” says Assistant Cross Country Coach Carl McCargo. “Her leg can be bothering her to the point where she can’t run, but she’ll still take the time to stay at practice and push herself in cross-training workouts and support her teammates.”

Lily hopes she can improve on her times, which are not as strong as pre-accident, but she can’t hide her excitement to be outside running again.

“I’ve always been very passionate about running,” she says. “I had a lot of moments of reflection over the past year, and I think I remained positive. I never doubted that I’d be running again, and now I am.”

However, it was almost at a different school.

While Lily was considering Marietta, she was also highly interested in Bucknell, Virginia Tech and Denison. Petroleum Engineering was something she wanted to major in, and then came the really good news — she was awarded the prestigious John G. and Jeanne B. McCoy Scholarship.

The McCoy Scholarship Program was endowed in 1998 by John G. ’35 and Jeanne B. McCoy to promote and recognize outstanding academic ability and achievement in an incoming freshman student. The award includes tuition, fees, room and board, and is renewable for four years. That will add up to around $185,000 for Lily.

“I remember reading the letter and being sort of speechless for a moment,” Lily says. “It is an incredible honor, and it has definitely made me more determined to achieve in school.”

A couple of months into her first semester, Lily can’t imagine being anywhere else.

“I love the surrounding area. I go for runs along the river trail,” says Lily, who recently turned 19. “My roommate and I have become very good friends, and I just feel right at home at Marietta. The connections I am making have helped me realize (coming to Marietta) was a great decision.”

Lily is glad she chose to be Pioneer.

“I’d say there has never been a day when she hasn’t asked how I’m doing or the others around her — no matter the level of pain she’s in,” McCargo says. “I believe she is truly our role model for perseverance, and I look forward to seeing how she will become even more of an asset to the campus and community as she settles in at Marietta.”