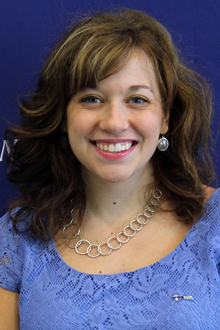 When Lindsey Kudaroski ’14 (Washington, Pa.) was a mere sophomore, she became president of Marietta College’s chapter of Public Relations Student Society of America. Little did she know that by her senior year, her commitment and dedication to public relations would lead to national recognition.

“Since I had attended numerous national PRSSA events,” Kudaroski said, “I knew how stiff the competition would be and wanted to be realistic about my chances.”

Kudaroski, 21, was up against senior undergraduate public relations students from across the country. Judges were looking for academic achievement, leadership demonstrations, practical experience in internships, commitment to public relations and strong writing skills.

“I was genuinely shocked when I received notification that I had won the award,” Kudaroski said, “and even more amazed when I learned that I received first place.”

Dr. Jane Dailey, Associate Professor and adviser of Marietta’s PRSSA chapter, was thrilled but not surprised when the award was announced.

“She was strong in every category,” Dailey said. “Knowing that she took top honors against some very competitive schools not only speaks volumes of her abilities but also of the experience she’s had at Marietta both academically and as a student leader.”

Kudaroski’s leadership was evident early on when she became president of Marietta College’s PRSSA in her second year of studies.

“As chapter president, she has done a great deal to get our very young chapter recognized locally, regionally and nationally,” Dailey said.

It is hard to pinpoint what exactly Kudaroski will be doing after graduation in the spring of 2014, but it is safe to assume she will be an asset to any organization.

“In terms of Lindsey’s future, I think she shows great maturity and promise,” Dailey said. “She has the intelligence, drive and sense of honesty that is so critical to professional success in public relations.”

Kudaroski will be greatly missed by her PRSSA chapter, but she has no doubt in its continued success.

“My hope for Marietta College PRSSA is that it will continue to grow and thrive long after I'm gone,” Kudaroski said. “Right now, we have a fantastic executive board, and I'm confident they will keep our current momentum going.”