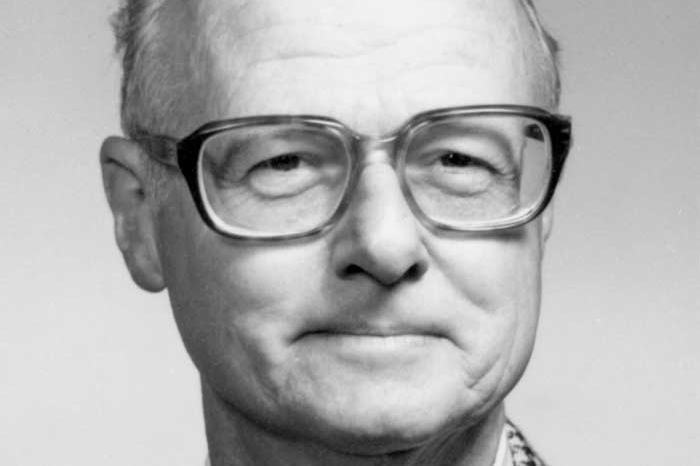 McCoy Professor of Accounting Grace Johnson, who started at the College three months after his retirement, had a great amount of respect for Dr. Hill.

“Although we did not work together as faculty colleagues, he had a bigger-than-life persona among those of us who were newly hired Marietta faculty in the early 1990s,” she said. “He never was too busy to stop what he was doing for a moment for a pleasant chat. And no matter the setting, Dr. Hill was always dressed in a suit and tie or dress trousers and a sport jacket.  He was a traditionalist and a gentleman in that respect, characteristics that you don’t often come across today.”

He was promoted to assistant professor at Marietta in 1962 and named Head of the Political Science Department in 1970. In a letter to Dr. Hill, President Sherrill Cleland wrote on Aug. 18, 1975:

“You have earned my thanks and the thanks of Marietta College in many areas this past year. Chairing the Tenure Committee is just one of the highlights. As the new year opens I want to offer you my full support. I know it will be a demanding year on your department because you are temporarily understaffed.”

Dr. Hill also headed up the former Master of Arts in Liberal Learning program. Following retirement, Dr. Hill remained active at Marietta College the Secretary to the Board of Trustees, special events coordinator and through the Learning in Retirement program.

"With the death of Robert Hill, the College has lost one of its characters," said Fraser MacHaffie, professor emeritus in Business & Economics.  "I usually found Bob to be a bit intellectually intimidating — not because he was aggressive or a bully, but because he was so wide read and knowledgeable and assumed the same of his conversation companions. He would engage me in discussion on one of his heroes, the philosopher David Hume, part of the 18th century Scottish Enlightenment. Then we would hop to the prospects of an independent Scotland."

In a letter he wrote to President Cleland in the early 1980s, it was clear Dr. Hill had what was best for the College at heart. He wrote: “The College should openly and unashamedly proclaim itself devoted to the fitting of its students for careers. It should recruit able students with the promise that they will be enabled and expected to shape their college careers with an eye to their post-college careers.”

Following high school graduation in 1945, he served briefly with the Army Air Force and reached the rank of sergeant. He graduated from St. John’s College in Annapolis, Maryland, and received his Master of Arts and Ph.D. from the University of Chicago.

For 40 years Dr. Hill sang with the Marietta College Chorale in the annual presentation of “Messiah.”

Funeral services will be held 10:30 a.m. Saturday, March 11, 2017, at the First Presbyterian Church in Marietta, with the Rev. Tom O’Connor officiating. Burial will be in Mound Cemetery. Robert’s family will greet friends at a reception at the church immediately following the committal service.

Online condolences and many other resources may be found by visiting www.CawleyandPeoples.com.