Remember the milestone moments of 2016 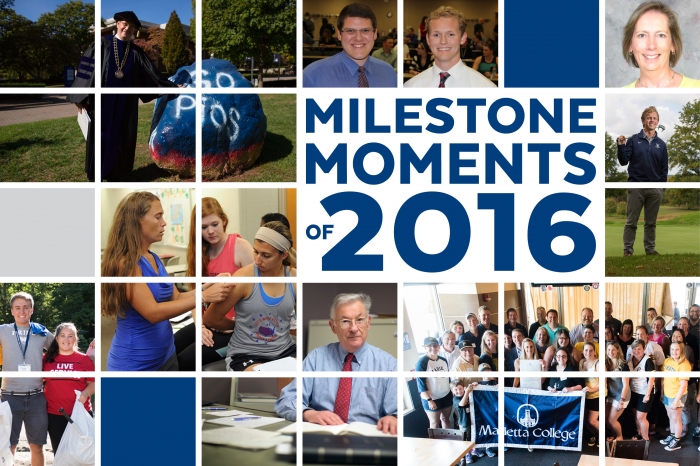 A look at Marietta College’s 2016 year in review has the potential of journeying on to be a 366-day highlight reel (yes, adding to the highlights was the fact that 2016 was a leap year).

One of the biggest stories to generate from campus was the inauguration of Dr. William N. Ruud as the College’s 19th President. Bill Ruud and his wife, Judy, arrived on campus in early July and immediately began working to connect to members of the campus community and the community at large. h

Academically, the College celebrated many accomplishments, including a pair of Petroleum Engineering majors winning the inaugural PioBiz competition. Aaron Dillon ’17 and Jon Hinson ’17 came up with the top company idea, Thunder Resources. The start-up would locate, identify and manage local abandoned oil wells. The idea garnered recognition as well as earned access to up to $10,000 in financial assistance through a grant provided by the Arthur Vining Davis Foundations.

The Education Department received a $223,000 Incentive Grant, provided by the Ohio Deans Compact on Exceptional Children to back the restructuring of the Early Education and Intervention Specialist degrees in order to develop a merged dual licensure teaching preparation model. The department also gained recognition when the Ohio Association of Colleges of Teacher Education recognized Department Chair Dr. Dottie Erb with the Outstanding Teacher Educator Award.

Other notable academic news from 2016 included the Athletic Training Program earning re-accreditation through the Commission of Accreditation of Athletic Training Education after a two-year process, Marietta’s Tutoring Program earned Level I and II International Tutor Training Program Certification by the College Reading & Learning Association, and the College added an Entrepreneurship minor and an Organizational Social Responsibility minor and certificate through the McDonough Center for Leadership and Business.

Additional news from campus included the announcement of two major book projects in the works. Professor Emeritus Fraser MacHaffie began research to write the College’s third history book, which would cover from 1987 to 2017. Also, renowned historian and Pulitzer Prize-winning author David McCullough began his research on Manasseh Cutler, relying heavily on the offerings in Marietta College’s Special Collections and other local resources.

Another Pulitzer Prize winner was brought to campus in May. New York Times journalist Helene Cooper delivered the keynote address during Commencement 2016.

In June, the College announced that it had reached the 2015-16 Marietta Fund Goal of $2.15 million. During the summer, Marietta hosted the inaugural Mid-Ohio Valley Entrepreneurship Expo and announced the revitalized Esbenshade Series, which has been well received in the community.

Alumni helped usher in a new vision for the men’s and women’s rowing program with their support of the Lindamood/Van Voorhis Boathouse Renovation Project, which was dedicated during Homecoming Weekend in October. Alumni also expanded the Marietta College community to other parts of the country by celebrating the chartering of Regional Associations in New York and Pittsburgh, and beginning the process for Central and Northeast Ohio, Cincinnati and Eastern Pennsylvania.