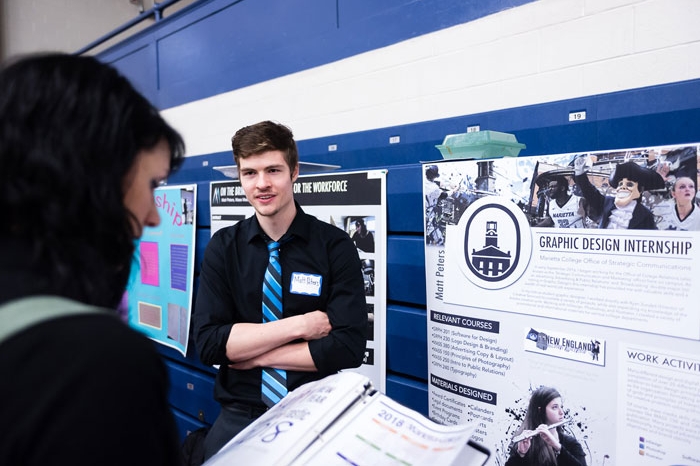 When it comes to learning about an industry’s newest advancements and constantly changing climate as well as having the opportunity to network with and get advice from leaders in the field, nothing beats attending a national conference.

After attending the 2017 ADAMERICA Conference from June 7-10 in New Orleans with Assistant Professor of Communication Lori Smith and Adjunct Instructor Art Smith of Communication, Matt Peters ’18 (Elyria, Ohio) brought back a trove of great notes, memorable takeaways and new contacts within the advertising industry.

ADAMERICA is the American Advertising Federation’s (AAF) national conference, connecting all aspects of the industry. Influential agencies, clients, media companies, suppliers, and college students from across the country all gather to address how to thrive in today’s economy and how the changing culture of business and consumers is impacting the advertising industry.

Peters knew attending the conference, where he could discuss such topics and interact with people representing so many segments of the industry, would be one of the best professional development opportunities he could hope to participate in.

“Because the American Advertising Federation is a professional organization, the majority of people in attendance were experienced professionals currently working in the industry. I had the opportunity to learn from, and network with, these people,” he said. “I was there alongside creative directors, account executives, graphic designers, and media specialists from all over the country.”

Not only were so many positons represented, but also individuals from some of the top organizations.

“There were speakers from some of the most well-known and respected agencies and media companies in the country, including speakers form Conde Nast, Adobe, Viacom, CAA Marketing, FCB, Omnicom, and 72andSunny,” Lori Smith said.

While at the conference, Peters and the Smiths attended every learning lab and keynote speaker they could fit into their days so that they could come to better understand the latest developments in the ever-evolving advertising industry.

With topics ranging from art and design to leadership and public speaking, the workshops and presentations offered a wide variety of insight, something Peters appreciated as someone interested in many aspects of the advertising field.

Though discussion about innovation ranged from the use of social media to creative, digital, new business, and mobile advertising, one major theme stood out to both Peters and Lori Smith: the importance of advancing diversity and inclusion initiatives.

“In an increasingly diverse, and relatively unstable, sociopolitical landscape, it’s imperative to stay on top of cultural trends,” Peters said. “Many of today’s most successful advertisers are those that surround themselves with people different from themselves.”

Some major presentations that stood out to Lori Smith included one about the success of creative diversity and inclusion efforts as well as one about being a purpose-driven company in today's political climate and another about what the agency of the future will be like.

She also elaborated on the discussions of this overarching theme by reflecting that this not only meant the diversification of creative produced by the industry but also changing the culture of the workplace itself.

“They discussed how the agency of the future needs to truly support more women and minorities in creative leadership,” she said. “More diversity will equal better creative, and in the end, better creative equals profitability, and it is just the right thing to do.”

She said that watching the winning team present for the National Student Advertising Competition was also a great chance to see students showcase their talents.

Another prevalent topic that stuck with Peters is the fact that research really is key to any successful advertising campaign.

“It sounds simple, but in the ever-expanding landscape of social media, search engine optimization, and other digital platforms, information can be cluttered, contextual and challenging to interpret,” he said. “Understanding these platforms is vital in reaching Generations X and Z. Sometimes random Facebook trends (GIFs, hashtags, etc.) can actually serve as cultural insights or powerful advertising tools.”

In between all of the sessions they attended, Peters and the Smiths were able to reconnect with several individuals from the Cleveland and Akron AAF clubs and meet a Marietta College alum, Mike Weber ’73, who is now the CEO/Producer of CMR Studios, a video and audio production company in the Tampa/St. Petersburg, Florida area.

“He (Weber) told us how he owed his career to Marietta College — that he started in pre-med, and then decided to work at the College radio station,” Lori Smith said. “He majored in broadcasting and then went on to do talk radio in Cincinnati before owning his own production company in Florida.”

In the little bit of down time they found within their jam-packed days, Peters and the Smiths made it a point to soak up all that New Orleans has to offer.

“New Orleans is a city filled with character, culture, and lots of great food,” Peters said. “Along with my professors, I got to explore much of the French Quarter, and downtown area. A few highlights for me included browsing the art vendors at Jackson Square, watching a full jazz group perform on Bourbon Street, and tasting some of the best seafood in the country.”

Chances to experience such unique and defining cultural aspects of new places is but one of the reasons Lori Smith believes attending professional development events is so important for students.

“This type of travel exposes students not only to new ideas and a variety of perspectives, but it often allows them to experience different cultures,” she said. “As we toured New Orleans, Matt saw firsthand the live-music scene and the unique blend of French, African and American cultures within one city. Because he is very interested in photography and film, Art took Matt on a special photography session through the city when we weren’t at the conference.”

The experience was made possible, in part, through an award Peters received through Marietta College. As the recipient of the Ralph White Jr. Memorial Professional Development and Travel Award, Peters was able to offset the costs of traveling and attending the conference.