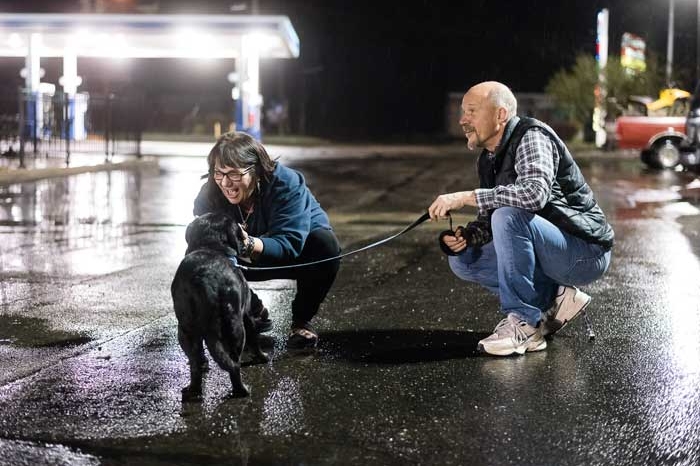 In the months leading up to his death, Joel Wunnenberg ’20 talked about and texted photos to his mother, Kim, of Oliver, a sweet, black and white pound puppy that had stolen his heart while Joel was volunteering at the Humane Society of the Mid-Ohio Valley.

Weeks after Joel died, Kim and Joel’s father, Doug, began thinking more and more about the dog, and wondered if he had found his forever home. In the short time Joel was a student at Marietta, the petroleum engineering major played football, was a McDonough Scholar and volunteered at the Humane Society, where he walked and played with the dogs to give them companionship and plenty of exercise. Joel shared stories about his experiences to his family, and many of them involved Oliver.

This week, she reached out to the Humane Society and learned that Oliver was transferred to a program called “On Angels Wings Inc.” in Illinois and was recently placed in a home. Kim asked to be called if the adoption fell through or if they had any updates on Oliver. About 10 minutes later, Kim’s phone rang with an update.

“They called back and said the woman had fallen ill and was in the hospital,” Kim said. Once again, Oliver needed to find a family.

The Wunnenbergs wanted to be that family — which is when Oliver’s 500-mile journey from Barrington, Illinois, to Springdale, Pennsylvania, began. Within 24 hours, the Wunnenbergs had filed adoption papers for the dog. Numerous volunteers shared social media posts asking for help transporting the dog from Illinois to Pennsylvania. A member from On Angels Wings Inc., already transporting adoptable dogs to Toledo, agreed to make room for Oliver as long as someone could take the 6-year-old dog the rest of the way.

When Marietta College’s Vice President for Student Life & Diversity, Dr. Richard Danford, got word of the plan, he didn’t waste any time. He rented a car and made the four-hour drive on Thursday and picked up Oliver.

“He tried out every seat so he could get the best view of the drive,” Danford said. “He was a great passenger.”

Danford made the rainy 3½-hour-drive back to Cambridge, where he met the Wunnenbergs at a Wendy’s just off Interstate 77.

“Joel’s passing impacted all of us at Marietta College, and this was something I wanted to do for Kim and Doug,” Danford said. “I hope this helps them with their healing process.”

As soon as Kim and Doug pulled into the Wendy’s parking lot, they bounded out of their full-size black truck and headed over to meet the dog their son never could forget.

“Joel was strong and had these huge legs,” Kim said. “He used to say, ‘Mom they keep giving me this 40-pound dog, but I can handle the big ones.’ ”

On Thursday, Doug realized why they preferred Joel to walk Oliver.

“He’s a strong dog and he wants to run,” Doug said.

After 30 minutes of Doug walking Oliver around the parking lot and across the road toward a gas station in the rain, the newest member of the Wunnenberg family jumped into Kim’s truck for the ride home.