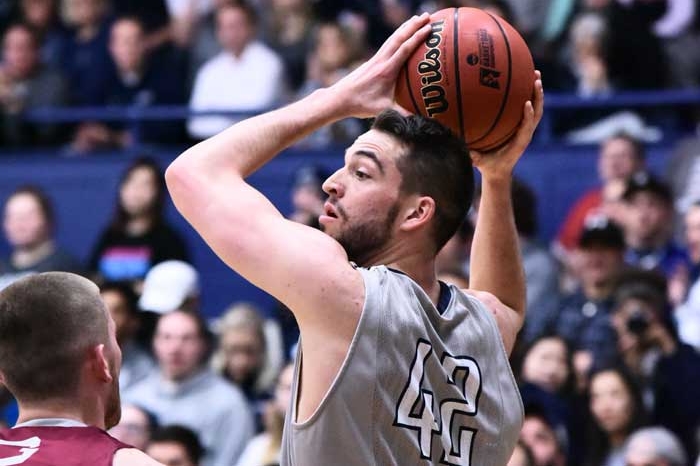 Marietta is back in the Sweet 16.

With a convincing 88-64 victory over No. 23 Guilford Saturday night, the Pioneers (26-4) will continue their quest for an NCAA Division III Men’s Basketball championship next week.

No. 7 Marietta has a chance of hosting the next round, but won’t learn its fate until Sunday.

Home games this late in the season are critical, especially with a loud PioNation crowd packing Ban Johnson Arena. It was filled with 1,561 fans Saturday. The Quakers, who took an early 13-3 lead, learned quickly why Marietta is now 17-0 on Fenton Court this season.

“No. 1 (Marietta) is really good, and then on this court with that crowd. Every time they make a basket it’s an avalanche,” said Guilford coach Tom Palombo. “We got off to a great start and I thought the key was when we turned over those two or three times in a row and they got a couple of lay ups. They got the momentum going and the crowd back into it. … Couple that with the fact that they are really good and it was tough for us.”

It was the second straight game the Pioneers fell behind early, only to roll to an easy victory. In the first round, Marietta defeated Calvin 83-66. VanderWal said it might be the best his team has played all year.

“I think so, especially defensively. We held them to 39 percent shooting today,” he said. “Especially against the caliber of opponents we played on back-to-back nights is probably about as good as we have been playing.”

Sophomore Anthony Wallace scored 19 points for the second straight night on 7 of 10 shooting. Wallace is excited to be advancing to the next round, but he said none of the Pioneers are satisfied with just making the Sweet 16.

“We know this is nowhere near where we want to stop,” he said. “For me it’s special because this is the farthest I’ve ever been at Marietta. I’m just taking it all in right now.”

Palombo said junior Keith Richardson was a big reason why the Quakers (24-6) couldn’t get back into the game. Richardson finished with 19 points and 10 assists.

“We couldn’t get stops and we blew some defensive assignments,” Palombo said. “They are going to make you pay every time you make a mistake. … We had a really hard time containing their point guard. He really broke us down off the dribble. Even though they made a lot of 3s, I think he was the key.”

VanderWal heaped a lot of praise on the 5-foot-9 Richardson as well.

“I told Keith when he came out of the game that I’m proud of him,” VanderWal said. “I thought he managed the game extremely well, both nights and at both ends of the court. He was like a coach on the floor.”

The biggest surprise of the night, though, had to be 6-4 freshman Caleb Hoyng scoring 14 points on 5 of 5 shooting. He also banged home four 3-pointers.

“Caleb Hoyng stepped up huge tonight hitting all of those 3s,” VanderWal said. “Caleb played three minutes last night. I tell the guys nothing gets better by pouting and feeling sorry for yourself. You just have to stay the course and be ready to go and Caleb did that.”

“We had a great year and I feel like we maximized what we had,” Palombo said.

VanderWal has a good feeling about the Pioneers and their chances moving forward.

“We just feel like we have a pretty special group this year. When we’re dialed, especially when we’re defending the way we’re defending … we’re pretty good,” he said. “This group, if we keep our confidence and we keep playing like we’ve been playing, we got a chance to make a run — not just say we got to the Sweet 16.”