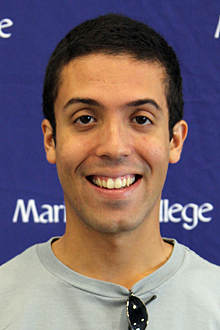 Marietta College’s Eric Miranda-Marin ’15 (Olmsted Falls, Ohio) is one of approximately 550 U.S. undergraduate and graduate students who received a scholarship from the U.S. Department of State’s Critical Language Program in 2015.

Miranda-Marin will study in Dalian, China this summer, “with a goal of improving my Chinese,” he said. Miranda-Marin graduated earlier in May with a Bachelor of Arts degree in Political Science.

The CLS Program is part of a U.S. government effort to expand dramatically the number of Americans studying and mastering critical foreign languages. It provides fully funded, group-based intensive language instruction and structured cultural enrichment experiences. CLS Program participants are expected to continue their language study beyond the scholarship and apply their critical language skills in their future professional careers.

Selected finalists for the 2015 CLS Program hail from 49 states, Puerto Rico and the District of Columbia and represent more than 200 institutions of higher education from across the United States, including public and private universities, liberal arts colleges, minority-serving institutions and community colleges.

Consistent with the U.S. Department of State’s goals to increase diversity among international educational exchange program participants, the CLS Program actively recruits in states and regions of the United States that have been historically under-represented in international exchange and encourages students from diverse backgrounds and academic majors to apply. The CLS Program also promotes diversity in the independent review process, and includes readers and panelists from 48 states, Puerto Rico, the District of Columbia and 279 institutions, including land-grant public universities, liberal arts colleges, Historically Black Colleges and Universities, Hispanic-serving institutions, Ivy League institutions, and community colleges. In 2015, more than 450 professionals, including critical language faculty, area studies specialists, international education professionals, and fellowship advisors, participated in the selection process for the CLS Program.

CLS Program participants are among the more than 50,000 academic and professional exchange program participants supported annually by the U.S. Department of State’s Bureau of Educational and Cultural Affairs to promote mutual understanding and respect between the people of the United States and the people of other countries. The CLS Program is administered by American Councils for International Education.

For further information about the CLS Program or other exchange programs offered by the U.S. Department of State’s Bureau of Educational and Cultural Affairs, please contact ECA-Press@state.govand visit our websites at http://www.clscholarship.org and http://exchanges.state.gov.