Schaly ’84 shines at College World Series as an umpire 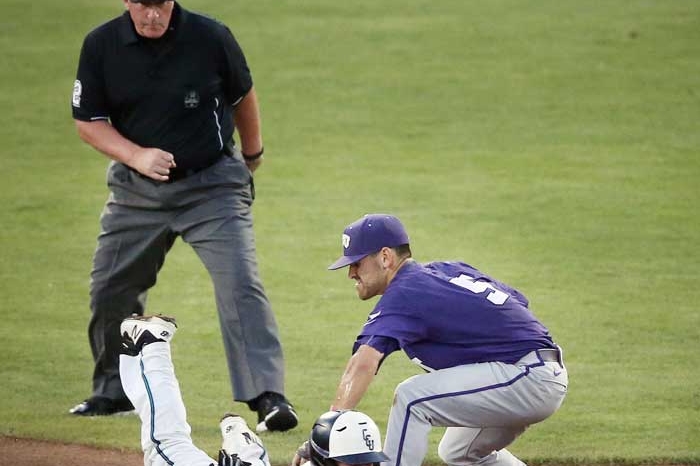 Jim Schaly ’84 thought he was his own harshest critic. Then he umpired in the 2016 College World Series in Omaha, Nebraska, and found out someone else likes to critique his work.

“After every game, mom (Sue Knicely Schaly ’62) would call me and tell me about every call I missed,” said Jim, who earned a Bachelor of Arts in Elementary Education. “Then my brother (Jeff ’90) would get on the phone and talk about a call I missed.”

Every night he would have about 50 voicemails or texts.

“I’d spend an hour responding to them. A lot of people were following the games, and since I’ve been back in Marietta, there have been people stopping me to tell me they watched,” he said.

Jeff Schaly said growing up in the Schaly home required all four brothers — which also included John ’82 and Joe ’86 — to have thick skin.

“I call him after each game and thanked him for not embarrassing the family,” Jeff said. “In all honesty, each of us is proud of his accomplishments as an umpire.”

It was the second time Jim earned a spot on the World Series eight-person umpiring crew — his first trip was in 2011. Umpires are evaluated throughout the year by NCAA regional evaluators, Division I conference coordinators and coaches, and Jim was rewarded with the selection after being rated one of the best in NCAA Division I this past season.

“All of the feedback I’ve received from the NCAA is this was a very well-umpired College World Series from top to bottom,” said Rich Fetchiet, Coordinator of Baseball Umpires for the Big Ten, as well as seven other Division I conferences. “And Jim’s performance was considered top notch.”

Jim said he was able to relax a little more the second time at TD Ameritrade Park Omaha.

“The first time I was there I was dealing with some nerves and I wanted to make sure I was in the right place all of the time,” he said. “You are surrounded by CWS people, NCAA people and of course ESPN. This time, I was able to go out there and umpire the games and have fun. This was an enjoyable experience.”

He umpired 10 of the 17 games, including all three championship series games in which Coastal Carolina knocked off perennial power Arizona.

“The first two games were really exciting because Arizona had about 2,000 or so fans, but the rest were for Coastal Carolina. It was such a good story that the people of Omaha and any fans of other teams that were eliminated were rooting for Coastal,” Jim said. “We had a rainout on the third night so we ended up playing the next day and most people had to leave, but it was still exciting to be a part of this.”

Jim has been umpiring college baseball for 36 seasons and has worked 19 NCAA Division I conference tournaments, 13 regionals and six Super Regionals — including one at LSU. He worked a total of 72 college games in 2016 beginning in February.

“I had to work so many conference tournaments, regionals and Super Regionals before I was even eligible for consideration to do the World Series,” Jim said. “People ask me all of the time if it’s hard to work the World Series. While there is extreme pressure every game, it really isn’t. They treat us so well and, in some ways, the crowd is there to see good baseball. What’s tough is working a regional at Mississippi State and the crowd of 15,000 is mostly rooting for them. When you make a close call there, they let you hear it.”

Jim is the second of four sons for Sue and the late Don Schaly ’59, Marietta College’s legendary baseball coach who guided the Pioneers to three NCAA Division III National Championships in the 1980s.

“Dad is a big reason why I achieved a lot of this,” said Jim, who is currently umpiring games in the independent Frontier League. “I learned a lot about umpiring from him, and he used to tell me that he learned a lot about the game because of what I could share as an umpire. I think we made each other better.”