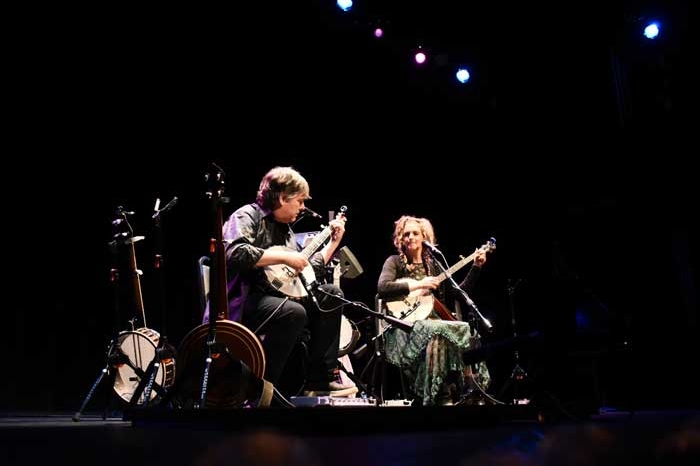 Since 1980, Marietta College has been offering free community performances and speakers through the Frederica G. Esbenshade Series.

While there have been many memorable moments over the years, those currently involved with the planning and organization of the program believe the series reached a new high before, during and after the Béla Fleck and Abigail Washburn concert on Sunday, October 9th.

“It was magical,” said Dr. William N. Ruud, President of Marietta College. “I am new to the area, but you could sense an excitement Sunday during the performance that the Esbenshade Series at Marietta College has tapped into something special. The bond between the community and the College has always been important, but our new partnership with the Peoples Bank Theatre to conduct performances there and still be able to provide them for free to the community took on a new meaning during the Béla Fleck and Abigail Washburn concert.”

Fleck and Washburn put on an intimate show as they engaged the audience with their music, stories and humor.

“Their show was like watching a husband and wife play music together in their house, and they invited us all in to be a part of it,” said Marietta College Provost and Dean of the Faculty, Dr. Janet Bland.

Tanya Wilder, Director of the Esbenshade Series, was excited to see that every ticket for first show at the Peoples Bank Theatre in downtown Marietta was accounted for by community members, Marietta College professors and students and music lovers from as far away as Pittsburgh.

“With two phenomenal musicians on stage and a packed house, the Esbenshade Series kicked off its performance block of the 2016-17 programming with a huge success,” Wilder said. “Béla Fleck and Abigail Washburn played an amazing concert, and I certainly appreciate their donation of merchandise sales to EVE, Inc. The collaboration between the Esbenshade Series and the Peoples Bank Theatre is also very exciting, as it underscores the commitment of both entities to bringing top-tier performance to Marietta and surrounding areas. Overall, I think the afternoon was a tremendous success on all levels!”

Fleck and Washburn raffled off a banjo ukulele, which was won by retired Marietta College employee Debbie McNutt.

Bland said it was the busiest she had seen downtown Marietta on Sunday. She even noted that all of the restaurants were filled with people who were attending the show.

“We were really thrilled at the success of our second event of the season — the first in our new collaboration between the College, the Esbenshade Series that we administer, and the Peoples Bank Theatre,” Bland said. “It’s a privilege to be part of the team that brings free fine and performing arts events to the Mid-Ohio Valley.”

President Ruud said the College is excited to be able to work with the Peoples Bank Theatre now and into the future, especially since the theatre is designed to host such events.

The original vaudeville house was built on May 18, 1911, and had a seating capacity of 657. In its more than 80 years, the theatre has changed locations, appearances and even names. The Hippodrome/Colony Historical Theatre Association successfully restored the theatre and reopened its doors in 2016.

This isn’t the first collaboration between the College and Theatre since it reopened. The Symphonic Band and Wind Ensemble performed their annual spring concert there in April.

R. Hunt Brawley, Executive Director of the Peoples Bank Theatre, said he expects the thriving partnership between the College and Theatre to continue for many years.

“Our first Esbenshade Series presentation of Béla Fleck and Abigail Washburn with Marietta College was a huge success,” Brawley said. “It was an exceptional performance and the audience just loved it. I think it was a great illustration of the perfect town/gown partnership that can exist between Peoples Bank Theatre and the College.”

The rest of the Esbenshade Series performances for the 2016-17 season will take place at Peoples Bank Theatre. Up next is Gavin George, a 13-year-old piano prodigy from Westerville, Ohio. He will perform at 3 p.m., Sunday, November 20. George was a gold-medal winner in 2010 and 2011 in the American Association for the Development of the Gifted and Talented International Piano Competition, and he performed twice in Carnegie Hall. He made his orchestral debut at the age of 7.

All Esbenshade Series programs have been funded by the Frederica G. Esbenshade Memorial Fund, which provides annual income for the purpose of bringing lectures, performing artists or programs of diverse nature to the campus for public appearances. The endowed fund was established in 1980 by Harry H. Esbenshade Sr. and Harry H. Esbenshade Jr., husband and son, respectively, of the late Mrs. Esbenshade of Uniontown, Pennsylvania. All events are free and open to the public.