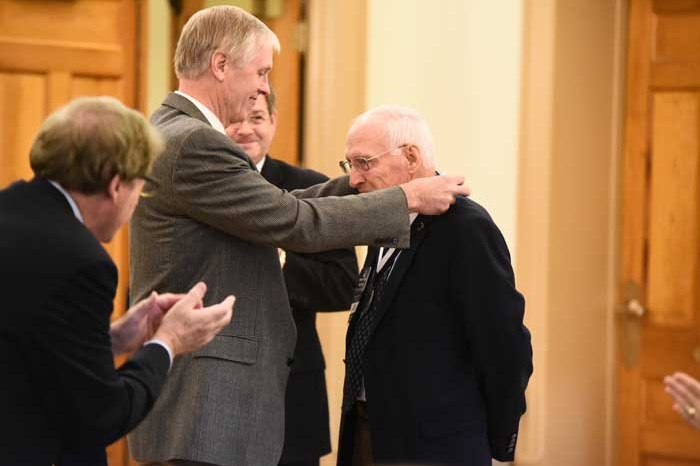 Timothy O. Cooper ’73, who served as Marietta College’s interim president for a few months, was honored by the Board of Trustees and President William N. Ruud during a luncheon Thursday afternoon.

Cooper, who Emeritus Trustee and former Board chair, was presented with a resolution from the Board, as well as receiving the inaugural Presidential Medal from Dr. Ruud.

“I love this College and couldn’t have done what I did if I didn’t love it,” Cooper said. “I think everyone in here today loves Marietta College. I also appreciate all of the support that I received every day on this campus … during a time when we were making a transition.”

Dr. Ruud, who will be inaugurated as Marietta’s 19th on Friday, October 14th, also announced that Thomas 124 has been officially renamed the Timothy O. Cooper Auditorium.

Cooper was joined by his wife, Sue. Also in attendance was Marietta’s 17th President Dr. Jean A. Scott, Board Chair George Fenton and a room filled with students, faculty and staff.

Cooper served as interim president from April 2016 to June 2016, and served as the chair of the College’s Board of Trustees from 1999-2004. He continues to volunteer with the Cotton Society, is a charter member of the Erwin Academy and he and his wife have established endowments for three scholarships that honor Marietta faculty.