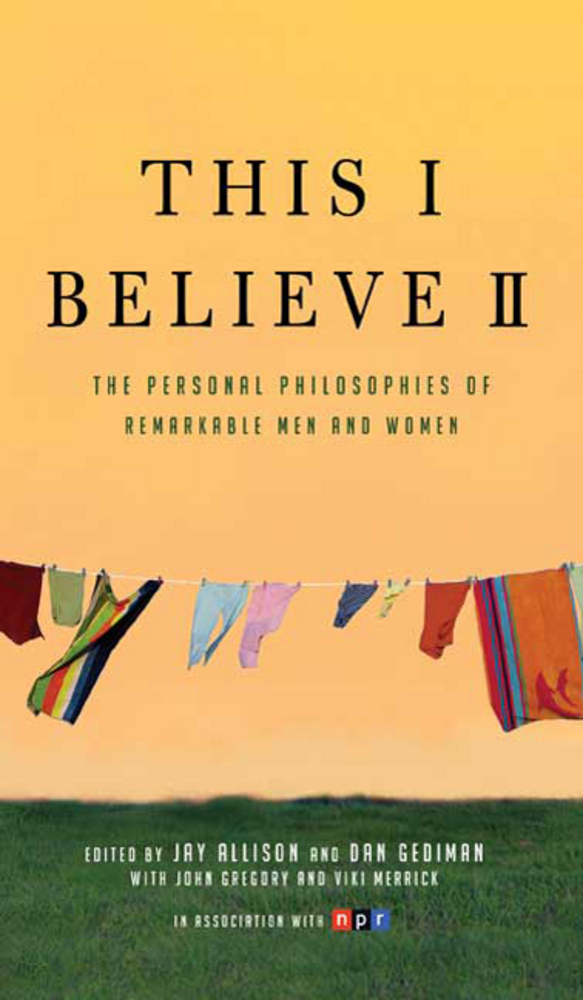 This I Believe II

This collection of This I Believe essays gathers seventy-five essayists―ranging from famous to previously unknown―completing the thought that begins the book's title. With contributors who run the gamut from cellist Yo-Yo Ma, to professional skateboarder Tony Hawk, to ordinary folks like a diner waitress, an Iraq War veteran, a farmer, a new husband, and many others, This I Believe II, like the first New York Times bestselling collection, showcases moving and irresistible essays.

Included are Sister Helen Prejean writing about learning what she truly believes through watching her own actions, singer Jimmie Dale Gilmore writing about a hard-won wisdom based on being generous to others, and Robert Fulghum writing about dancing all the dances for as long as he can. Readers will also find wonderful and surprising essays about forgiveness, personal integrity, and honoring life and change.

Here is a welcome, stirring, and provocative communion with the minds and hearts of a diverse, new group of people―whose beliefs and the remarkably varied ways in which they choose to express them reveal the American spirit at its best.

The author will speak on campus at a time to be determined.

The Work: My Search for a Life That Matters

Wes is the author of "The Work: My Search for a Life That Matters," which released Jan. 13, 2015, as an instant New York Times Bestseller. "The Work" picks up where "The Other Wes Moore" left off and follows Wes’s journey to the point where he discovered meaning in his work through service. While detailing his own path to purpose, "The Work" also profiles a dozen other inspiring people who have found their mission by uplifting their communities. Today, Moore’s mission is to help young people succeed and make the right choices through education and awareness alongside the support of their parents, teachers and mentors. Moore is the Founder and CEO of BridgeEdU, an innovative college platform that addresses the college completion and job placement crisis. BridgeEdU reinvents the freshman year in a way that engages students in real-world internships and service-learning opportunities in addition to core academic classes.

The Absolutely True Diary of a Part-Time Indian

An award-winning author, poet, and filmmaker, Sherman Alexie has been lauded by The Boston Globe as “an important voice in American literature.” His National Book Award-winning and semi-autobiographical novel, “The Absolutely True Diary of a Part-Time Indian,” chronicles the contemporary adolescence of one Native American boy as he attempts to break away from the life he was destined to live. Join him as he speaks about his life and the book that serves as Marietta College’s common reading for this year.

The author will speak on campus as part of the Esbenshade Series at 8 p.m., Wednesday, Sept. 10, on Fenton Court.

Author Alexie to speak at College on Sept. 10

Where am I wearing?

When journalist and traveler Kelsey Timmerman wanted to know where his clothes came from and who made them, he began a journey that would take him from Honduras to Bangladesh to Cambodia to China and back again. Where Am I Wearing? intimately describes the connection between impoverished garment workers' standards of living and the all-American material lifestyle.

By introducing readers to the human element of globalization — the factory workers, their names, their families, and their way of life — Where Am I Wearing bridges the gap between global producers and consumers. The book keeps with the College Theme of Internationalization: Global Perspectives for the 2013-14 school year.

The author will also speak on campus as part of the annual Esbenshade Series at 7:30 p.m., Tuesday, Sept. 10, on Fenton Court.

Author of Common Reading to speak at College on Sept. 10

The Other Wes Moore: One Name, Two Fates

The Other Wes Moore tells the story of two kids with the same name, living in the same city. One grew up to be a Rhodes Scholar, decorated combat veteran, White House Fellow, and business leader. The other is serving a life sentence in prison for felony murder.

Told in alternating narratives that take readers from heart-wrenching losses to moments of surprising redemption, the book tells the story of a generation of boys trying to find their way in a challenging and at times, hostile world.

He went on to be a paratrooper and Captain in the United States Army, serving a combat tour of duty in Afghanistan with the elite 1st Brigade of the 82nd Airborne Division in 2005-06. A White House Fellow in 2006-07, Moore served as a Special Assistant to Secretary of State Condoleezza Rice. Following his time at the White House, Moore became an investment professional in New York at Citigroup, focusing on global technology and alternative investments.

The book keeps with the College Theme of Leadership and Social Justice for the 2012-13 school year.

The author also spoke on campus as part of the annual Esbenshade Series at 7:30 p.m., Tuesday, Nov. 13, at the Alma McDonough Auditorium.

The Legend of Colton H. Bryant

Fuller wrote The Legend of Colton H. Bryant after moving to Wyoming and discovering the oil rigs on the high plains. Fuller said she was expecting the fierce weather and the roughnecks, the big skies and the industry men, but she wasn't expecting to encounter a real-life cowboy. Then Colton H. Bryant happened into her story, “a soulful boy with a mustang-taming heart and blue eyes that’ll look right through you.”

Fuller describes the life and death of the young man in Wyoming who lost his life on an oil rig. According to Fuller’s book, between 2000-06, Bryant was among 35 people who died in Wyoming’s oil and gas industry. After his death, Bryant’s company was fined $7,000 for safety violations, while boasting record profits the same year. Bryant’s family never received compensation.

The book keeps with the College Theme of Energy and Environment for the 2011-12 school year.

The author also spoke on campus as part of the annual Esbenshade Series at 7:30 p.m., Wednesday, Nov. 9, at the Alma McDonough Auditorium.

The Immortal Life of Henrietta Lacks

Her name was Henrietta Lacks, but scientists know her as HeLa. She was a poor black tobacco farmer whose cells—taken without her knowledge in 1951—became one of the most important tools in medicine, vital for developing the polio vaccine, cloning, gene mapping, in vitro fertilization, and more. Henrietta’s cells have been bought and sold by the billions, yet she remains virtually unknown, and her family can’t afford health insurance.

This New York Times bestseller takes readers on an extraordinary journey, from the “colored” ward of Johns Hopkins Hospital in the 1950s to stark white laboratories with freezers filled with HeLa cells, from Henrietta’s small, dying hometown of Clover, Virginia, to East Baltimore today, where her children and grandchildren live and struggle with the legacy of her cells. The Immortal Life of Henrietta Lacks tells a riveting story of the collision between ethics, race, and medicine; of scientific discovery and faith healing; and of a daughter consumed with questions about the mother she never knew. It’s a story inextricably connected to the dark history of experimentation on African Americans, the birth of bioethics, and the legal battles over whether we control the stuff we’re made of.

The book keeps with the College Theme of Health and Wellness for the 2010-11 school year.

Summer Reading: Provost recommends a Common Reading for the campus