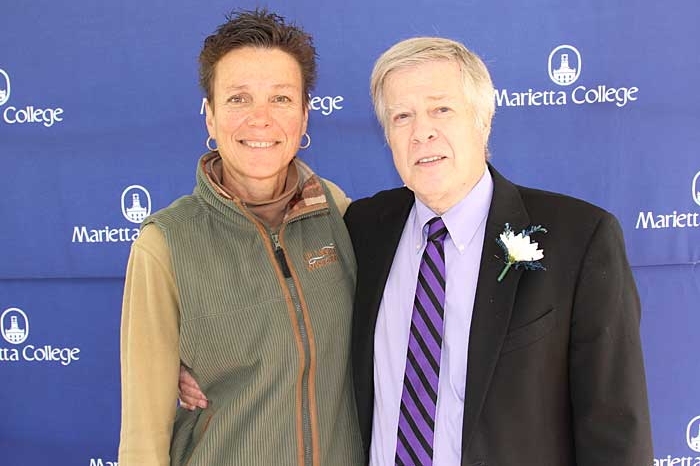 Before Robert “Bob” Walsh was a well-known name in professional sports, broadcasting and business, he was a broadcast major at Marietta College studying under the likes of Mass Media Professor Bernard Russi Jr.

With great sadness, the Marietta College community learned that Walsh died Monday, January 23, 2017, in Istanbul. He was traveling on business in Tblisi, Georgia of Eurasia. The 2013 Marietta College Hall of Honor inductee was 76.

After earning his degree from Marietta, Walsh quickly made a name for himself as a broadcast producer on the national stage, booking shows hosted by the likes of Regis Philbin and NBA legend Bill Russell. Russell later hired Walsh to serve as the Assistant General Manager of the Seattle SuperSonics. After leaving the team in 1976, Walsh began representing professional athletes and promoting major sporting events. He is credited for creating the March Madness celebration while serving as Executive Director of the NCAA Final Four Host Committee in 1984.

His ability to organize and manage quality sporting events allowed him to channel his gifts to help others in need nationally and internationally. In 1990, Walsh partnered with TBS founder Ted Turner and other agencies to produce the Goodwill Games. His work led him to travel to three dozen countries to coordinate events and establish nonprofit corporations that provide medical care, nutritional support, education and other community-supporting endeavors worth about $1 billion.

In addition to all of his national and international ties, Walsh never forgot about the small, liberal arts college that drew him from his Winthrop, Massachusetts, hometown.

“He was a guest speaker in my Sports Management classes,” said Debbie Lazorik, Associate Professor Emerita and longtime Athletic Director. “He was a very interesting man and he was very engaged with the students. He would come in and share his experiences and stories with the students, and it really intrigued them.”

Lazorik said Walsh followed up with some of her students about potential internships.

“One of the messages that he conveyed to the students was the need to give back in some way and that sports was a unifying factor,” she said, adding that Walsh also served in an advisory capacity during her time as AD. “He was a member of the Athletics Founders Board in the early 1990s, which was in charge of capital fundraising for our sports programs. Bob was not an athlete, but he knew the power that sports could play in uniting communities.”