Note:  The original printing of Dragonflies and Damselflies of Northeast Ohio is currently SOLD OUT - reprints can be ordered, however (see below). 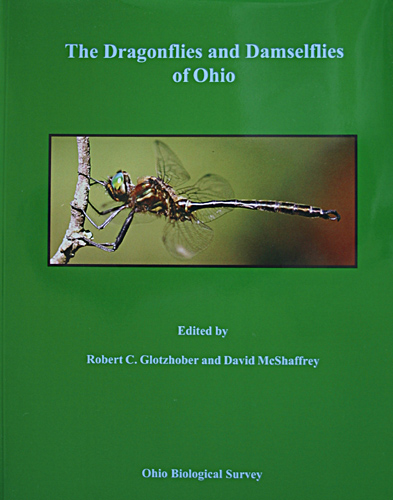 The Dragonflies and Damselflies of Ohio began with the Ohio Odonata Survey in 1990.  In addition to  looking at published records and museum specimens, the more than 212 volunteers helped to collect over 25,000 specimens.  All of the specimen records and historical data were entered into a database on which the distribution and seasonal activity data are based.

The book includes generic keys to the larvae and specific keys to the adult males and females for all 162 species known from Ohio (as well as a few species likely to occur here).

All keys are supported by over 471 drawings; every effort has been made to place the relevant illustration on the same page as the key couplet or on the facing page.  The book is available in both "perfect" sewn binding (softcover) or ring binder (shown). The ring binding is great for the lab as the pages stay open where you need them.  The perfect binding looks better on the shelf. Face it, you'll need both! You want both

The first part of the book includes information on basic biology, morphology and behavior of odonates, as well as background information on how the data for the book was collected.  There is a chapter on photographing Odonata, and a chapter on the history of collecting Odonata in Ohio.  The natural history section, shown here, includes labeled photographs and drawings to point out the important structures used in identification.  Similar drawings are used in subsequent chapters to deal with the idiosyncrasies of particular groups.

The history chapter outlines the contributions of many of the workers in Ohio, including Kellicott, Hine, Borror, and Homer Price (pictured clockwise from upper left) Homer is the guy with the big net.

The core of the book consists of the species pages.  Each page gives some tabular information on specific and common name, habitat and abundance (the latter using the unique method for uniformly assessing abundance and distribution developed by the Ohio Odonata Survey).  Textual information includes a description of key characteristics, interesting biology, and US and Ohio distribution.  Distribution, both geographical and temporal, is depicted graphically using maps and "flightlines" (abundance histograms).  The maps are shaded to show county records based on published data only (gray shading) or records based on specimens (dark gray shading).  The Ohio Odonata Society will continue to update distribution records via the web pages elsewhere on this site.  Errat from the book are listed here: Errata

Chapter 2. Collection and Preservation of Specimens.

Chapter 3. A Brief History of Odonata Workers in Ohio.

Chapter 4. How To Use This Book.

Chapter 7. Illustrated Key to the Families of Odonata for Ohio and Adjacent States

The Ohio Biological Survey is pleased to announce the release of this new book on the dragonflies and damselflies of Ohio.  This volume represents the culmination of efforts by the Ohio Odonata Survey and Ohio Odonata Society over the last ten years to collect and compile information about the odonates of Ohio.  The book contains chapters on the natural history of odonates, a history of Ohio odonate workers, 15 multiple-image color plates, illustrated keys and species descriptions and distributions.  The illustrated keys are designed for not only the professional but also the serious amateur -- with over 460 line drawings to explain the characters described in the keys.  The species descriptions include a discussion of habitat preferences, behavior and distribution, with county dot maps for Ohio and a flight line showing when adults have been reported in flight in Ohio.  Eleven authors worked on the various chapters, providing a baseline documentation of Ohio's species and a valuable resource for further study.