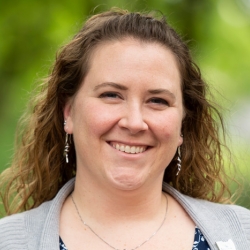 Anna Bock Mullins ’04 participated in a variety of extracurricular groups as a student, including Chi Omega, women’s rowing, Student Senate, the Student-Faculty Curriculum Committee, and Pre-Med Club. She was inducted as a member of Omicron Delta Kappa, the Order of Omega, Beta Beta Beta, and Sigma Delta Pi. Her studies included a summer at the University of Granada in Spain and upon graduation, she was awarded the Chapin Prize for Excellence in the Study of a Foreign Language.

Anna is in her ninth year teaching Spanish at Bishop Hartley High School, a private Catholic college-preparatory school on the east side of Columbus. In addition to teaching several levels of Spanish, she also mentors students in the Diversity Club and The Julias (a female student leadership initiative) and participates in a wide variety of faculty committees, curriculum initiatives, and extracurricular groups. She previously served as moderator of the school’s chapter of the National Honor Society for eight years.

The daughter of a 1966 Marietta College alumna, Anna’s connection to the college has been lifelong. Several of her former students have gone on to attend Marietta College, too, including graduates in the classes of 2018 and 2019. She has also served as a lead volunteer for the Greater Columbus Regional Association of Marietta College since its inception.