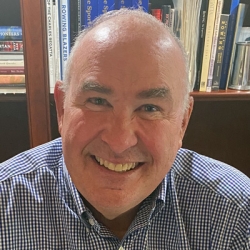 Brent Haney ’76 graduated from Marietta College with a degree in Managerial Economics. He credits his Marietta experience for his successes later in life and is happy to include the College in his many philanthropic initiatives — one of which is helping Marietta College Rowing to once again achieve national prominence.

Now retired, in his career, Brent was the principal of Haney College Placement Consultants that merged with Competitive Edge in the fall of 2013. In 2007, he co-founded Whitcomb-Haney College Placement Plus with Richard M. Whitcomb, Headmaster Emeritus of St. Luke’s. The partners specialized in helping families navigate the college process with the ultimate goal of having the student identify the best college that fits his/her passion both in and out of the classroom. Prior to becoming a College Consultant, Brent started his career working in advertising with Grey Advertising and J. Walter Thompson in New York City. He then spent time working in brand management with First Brands Corporation, which was acquired by the Clorox Company.

Brent and his wife, Christine, have lived in New Canaan, Connecticut, for more than 30 years and have three grown children and two grandsons. They spend their winters in Naples, Florida. Brent and Christine have been involved with many community-based organizations, both past and present, including the League Club of Naples, New Canaan Soccer Association, Junior League of Stamford/New Canaan, National Charity League, ABC House of New Canaan, St. Lawrence University Parents Committee, the Country Club of New Canaan Committee, the Carver Center of Norwalk, Connecticut, and Club Pelican Bay in Naples.