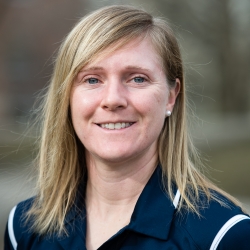 Caitlin Thomas begins her first season as assistant men’s and women’s cross country and track and field coach at Marietta College in 2016-17. Thomas comes to Marietta after a brief stint as the assistant cross country coach at Fontbonne University, an NCAA Division III member of the Saint Louis Intercollegiate Athletic Conference.

Prior to Fontbonne, she spent two years as an assistant cross country and track and field coach at Ohio Wesleyan University of the Division III North Coast Athletic Conference. She worked with the Battling Bishop distance runners and steeplechasers.

A native of Cardington, Ohio, Thomas served three seasons as a volunteer assistant cross country coach at her alma mater, Cardington-Lincoln High School. She also worked with the Cardington youth program as well as serving as an independent coach and training consultant for local high school runners.

In conjunction with her time as a volunteer assistant at Cardington-Lincoln, Thomas was a graduate teaching assistant at Bowling Green State University. She completed a Master’s Degree in Wildlife Biology from Bowling Green in 2015.

Thomas graduated from Xavier University in 2011 with a Bachelor of Science Degree in Biology. She was a four-year member of the cross country and track and field teams and served as team captain her senior year. Thomas was an NCAA Division I regional qualifier in the steeplechase and set school records in the 3,000-meter steeplechase and indoor 5,000-meter run.

Thomas holds a USATF Level 1 Track and Field coaching certificate. An avid runner, Thomas has completed seven full marathons, including the Boston Marathon on two occasions. She holds a personal best time of 3:00.09.