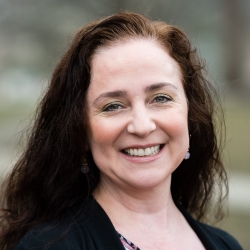 Carolina McNeely is a professional stage and film actress, writer, director, and educator from New York City, where she performed extensively and taught acting courses at City University of New York. With over twenty years' experience, she has appeared in regional theater; on New York stages, such as The Public Theater, New York Theater Workshop, and The Connelly Theater; and in film and television. Since re-locating to the area a few years ago, she has written and performed two different one-person shows about extraordinary Mid-Ohio Valley women, Frances Gage and Margaret Blennerhassett, as well as appearing in and assistant directing "Arcadia," a 2016 film by Andy J. Hall. She holds an M.F.A. in Acting from the Professional Actor Training Program at the University of Washington (Seattle), where she also earned undergraduate degrees in Drama and Comparative Literature, in addition to studying abroad.