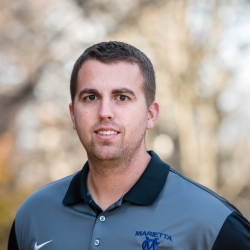 Chad Langley is an assistant baseball coach, who is responsible for the Pioneer outfielders and will assist with the hitters.

Langley comes to Marietta after spending two years as a graduate assistant at Marian University, an NCAA Division III member of the Northern Athletics Collegiate Conference. He worked with the Sabre infielders and catchers, as well as their hitters. While on staff at Marian, Langley spent the summers coaching the Racine Hitters 16U team and served as an assistant coach last summer with the Madison Mallards of the North Woods League.

Langley, a two-time All-NACC first baseman for the Sabres, was a career .348 hitter at Marian. He served as team captain his junior and senior seasons and finished his career with 40 doubles and 87 runs batted in.