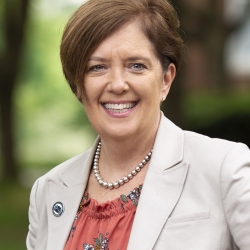 Chris graduated with a BS in Petroleum Engineering from Marietta College. During her time on campus, she was inducted in both Pi Epsilon Tau, the Petroleum Engineering honorary, as well as Kappa Mu Epsilon, the Math honorary. Outside the classroom, Chris was active as a member of Chi Omega sorority, where she served as Secretary and was involved in the Student Body Executive Board as Parliamentarian.

While graduating the mid-80s did not avail many opportunities in the upstream petroleum industry due to the price of crude oil, Chris started her career with a division of Dresser Industries in Houston. As the industry continued to contract, she moved back east and after a few years in an unrelated industry, landed a job with Mobil Oil in its Technical Service Laboratories. She worked in product development and technical service for their lubricant products business before moving into manufacturing as a plant Quality Manager. A few years after the merger with Exxon, Chris and her family relocated to the DC area, working at ExxonMobil’s downstream headquarters in various Strategic Planning, Supply Chain and Marketing roles before returning to a technical position as Americas Quality Manager and more recently as a Global Product Integrity Advisor. Throughout the 27year+ journey, she has been instrumental in quality systems implementation, both internal and external systems, including ISO 9001, QS 9000 and TS 16949 certifications across the lubricants plants.

Outside the workplace, Chris married fellow MC alum, Kevin Suter, and while raising their 2 children, have been supportive of their kids interests, acting as coach, team parent and supporter. In 2011, they embarked on an effort to start a high school rowing program, which was available in neighboring counties, but still foreign to most in Loudoun County, VA. Along with fellow Marietta alum, they founded Stone Bridge Rowing Club, where Chris served as President and Kevin as head coach, not only getting the infrastructure in place, but also working water access, navigating the the scholastic rowing association requirements and influencing the school board policy. Much time and effort was devoted and after 4 years the success of the program was realized with a supportive rowing community, some notable victories, and the school board recognizing crew as a non-funded varsity sport.

Chris and Kevin moved to the Houston area in 2015, with an ExxonMobil headquarters relocation and are enjoying life on Lake Conroe. Whether in Philadelphia, the DC area or in Eastern Texas, they have enjoyed connecting with Marietta alums!