Instructor of Trombone and Euphonium 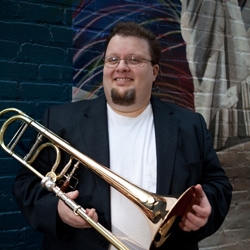 Christopher Dearth is the Instructor of Trombone and Euphonium at Marietta College. In addition to these duties, he is Principal Trombonist with the West Virginia Symphony and a member of the Trombonanza Trombone Quartet.  He has also performed as guest soloist at the Bach and Beyond Festival in Fredonia, NY, playing the alto trombone concertos of Albrechtsberger, L. Mozart, and Wagenseil.

Mr. Dearth studied with Per Brevig (formerly of the Metropolitan Opera) and Raymond Premru (formerly of the Philharmonia Orchestra and Philip Jones Brass Ensemble) at the Oberlin Conservatory. He was a teaching assistant and studied under Gail Eugene Wilson while at Arizona State University. Mr. Dearth was a member of the Sun Valley Brass Quintet, which placed second at the 1992 Summit Brass International Brass Ensemble Competition. After his time at Arizona State, he did post-graduate work at Indiana University with M. Dee Stewart (formerly of Philadelphia Orchestra), Keith Brown (formerly of Metropolitan Opera), Carl Lenthe (formerly of the Bamburg Symphony), and Scott Hartman (Boston University, Proteus 7, formerly Empire Brass).

While at Indiana, Chris was a teaching assistant, performed several recitals, did coursework toward his D.M., took several symphony auditions, and performed the Tomasi, “Concerto for Trombone with the Indiana University Symphony Orchestra as winner of the Brass Concerto Competition. He has also performed with the Phoenix Symphony, Indianapolis Symphony, Evansville Philharmonic, Owensboro Symphony, and Huntington Symphony. Mr. Dearth has also taught adjunct positions at West Virginia Wesleyan College, the University of Louisville, Morehead State University, Indiana State University, and Ohio University. Other teachers of his include Reginald Fink, Joseph Alessi, Mark Lawrence, and Milt Stevens.