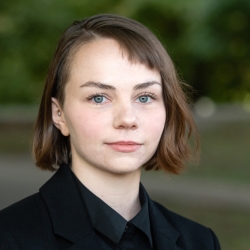 Emily Daniels joined Marietta College in October 2019 as the Admission Communication Coordinator. She grew up in Spencer, West Virginia, and attended Shepherd University, where she studied English, creative writing and journalism. Immediately after graduation, Emily worked as a state government reporter and city editor at a daily newspaper in the Eastern Panhandle. She then moved to the Twin Cities, where she worked as a web producer at WCCO-TV, a CBS affiliate in Minneapolis, Minnesota. Outside the office, she enjoys writing short fiction, reading, going to shows, being outside and observing the antics of her two cats.