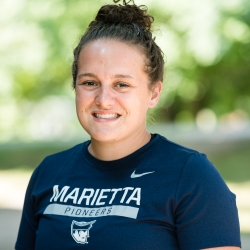 Jordan Anderson comes from a small town in upstate New York called West Edmeston. She graduated from Morrisville State College in 2017 with a Bachelor's degree in Human Performance & Health Promotion. During her college years, Jordan was a dual-sport athlete as she played four years of basketball and three years of lacrosse. Upon graduating, she became the assistant coach for Marietta's women's lacrosse team in its inaugural season. Jordan is also a certified strength and conditioning coach.