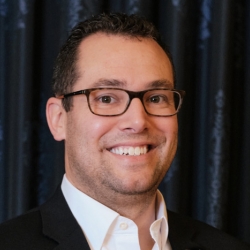 Dr. Joshua Jacobs, a dynamic and experienced fundraiser, is Marietta College’s Vice President for Advancement and is tasked with leading philanthropic initiatives and overseeing key programs that are important to the College’s future — including major gifts, alumni and parent engagement, and planned giving — while serving on President Bill Ruud’s senior leadership team.

He has a proven track record of exceeding fundraising goals, including five consecutive years of the largest fundraising totals in Central Methodist history. He also played a key role in exceeding a $20 million comprehensive campaign goal 18 months ahead of schedule. Under his leadership, CMU increased annual unrestricted gifts by 126 percent and increased donors by almost 49 percent. Hailing from Central Methodist University in Fayette, Missouri, where he has served as Vice President for Advancement & Alumni Relations since 2013, Dr. Jacobs previously worked as the Chief of Staff for the President at Murray State University in Kentucky.

Dr. Jacobs and his family live in Marietta.