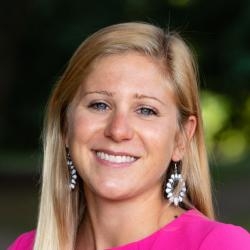 Hailing from Duncan Falls, Ohio, Layne is a 2017 graduate of Marietta College. After playing soccer and graduating with a degree in organizational communication, she returned to her alma mater to work with the staff and faculty to bring in new Pioneers. She enjoys being outdoors and her hobbies include traveling, boating, wakeboarding, eating ice cream, and running... to counteract the ice cream consumption. Layne's two favorite places on campus are The Christy Mall because there is always someone to socialize with and the Dyson Baudo Recreation Center.