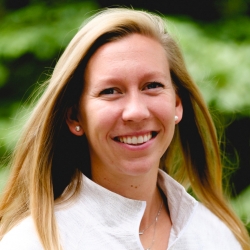 Nadrah comes to Marietta after serving as a graduate assistant coach at Lake Erie College, an NCAA Division II member of the Great Lakes Intercollegiate Athletic Conference, for the past two years. Her primary responsibilities with the Storm included serving as the defensive coordinator and goalie coach as well as strength and conditioning coordinator.

In her two seasons at Lake Erie, Nadrah helped develop three all-conference players, including two first-team honorees. Her defense ranked first in the GLIAC in goals allowed in 2017 and second in 2016.

In addition to her experience with Lake Erie, Nadrah spent four years as an assistant coach with the Hero’s Tournament Lacrosse Club in Maryland, as well as two years as a head coach with the Ohio Premier Club team in Cleveland, Ohio.

Nadrah competed collegiately at Frostburg State University, an NCAA Division III member, where she was a four-time All-Capital Athletic Conference selection and Rookie of the Year in 2011.

A three-year team captain and two-time MVP for the Bobcats, Nadrah capped her career with first team IWLCA All-Region honors. She holds the Frostburg single season and career records for draw controls.