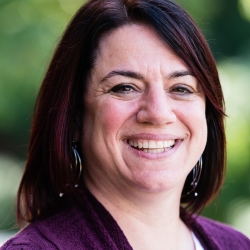 Marianne Candido ’85 graduated with a Bachelor of Arts in Political Journalism from Marietta College. During her time on campus, Marianne earned a varsity letter in field hockey, played varsity basketball and softball was co-editor of The Marcolian and head Resident Assistant of Dorothy Webster Hall. She is a member Chi Omega and was honored with the prestigious William Bay Irvine Award at graduation. After graduation, Marianne was one of the first representatives of Marietta College to teach at the Southwest University of Finance and Economics in Chengdu, China.

Marianne currently works as director of strategic sourcing for Honeywell Inc. driving global supplier agility, quality and process excellence. She is a member of the Furies Motorcycle Club, Andersonville Chamber of Commerce, Loyal Order of Moose, and Alumni Advisor to the Loyola Chapter of Chi Omega in Chicago.

Since graduation, her volunteer work on behalf of Marietta has included attending local college fairs and recruiting on behalf of her alma mater and returning to campus to speak to the McDonough Leadership Students as part of the Visiting Executive Program. A displaced New Englander, Marianne resides in Chicago and is involved in numerous charity activities there.