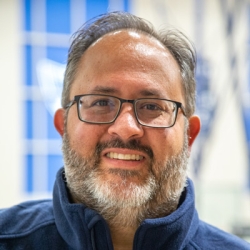 Mark Lane, M.D., graduated from Warren Local High School in Vincent, Ohio, in 1997. A native of the Marietta area he opted to stay local for college, matriculated and ultimately graduated from Marietta College in 2001 with a B.S. in Sports Medicine/Athletic Training. He then became a member of the inaugural class of the Marietta College Physician Assistant Program graduating in 2004 with a Master of Science degree. He worked in the field of orthopaedic surgery for almost five years as a P.A. in Atlanta, Georgia, before deciding to pursue medical school. He graduated from Northeastern Ohio Medical University’s College of Medicine in Rootstown, Ohio, in 2013 with his medical doctorate. He then completed a five-year surgical residency in Detroit, Michigan, at the Wayne State University/Detroit Medical Center Orthopaedic Surgery Residency Program and finally a fellowship in adult hip and knee reconstruction at the University of Missouri in Columbia, Missouri.

While at Marietta, Mark played four years for the men’s soccer team helping the team advance to the OAC tournament with one of the best records to date. He also served as a student athletic trainer for both lacrosse and women’s basketball as part of the Sports Medicine/Athletic Training Program. Dr. Lane is a hip and knee reconstruction specialist in private practice in Marietta, Ohio, at First Settlement Orthopaedics and Sports Medicine. He resides in Marietta with his wife Tia Knowlton Lane ’98 and their three children Ethan, Emma and Evan. He enjoys golf, mountain biking, traveling and spending time with his family.