MCAA Board (Chair of the Development Committee) - Class of 1976 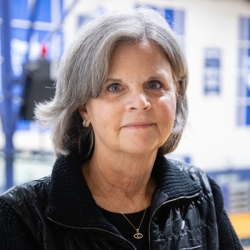 Nancey Kaplan McCann graduated from Marietta College in 1976 with a Bachelor of Arts degree in Speech, English, Drama, and Secondary Education. She was an active member of the Alpha Xi Delta Sorority.

Nancey, who retired at the end of March 2021, served as the Director of Government Relations for the American Society of Cataract and Refractive Surgery (ASCRS), an international, educational, and scientific organization whose more than 9,000 member ophthalmologists specialize in cataract and refractive surgery, for 28 years. She helped to establish and oversee the ASCRS Government Relations program and advocated for ASCRS legislative and regulatory policy objectives by representing the interest of ASCRS members before Congress, the Administration, and relevant regulatory burdens.

In addition to consulting for ASCRS, she is also a member of the Board for the Holland Foundation for Sight Restoration.

Prior to joining ASCRS, Nancey served in similar government relations roles for several trade associations including the Associated Credit Bureaus, the American Health Care Association, and the American Bankers Association. Nancey, her husband Brian, and their son, Ryan, a recent college graduate, live in Reston, Virginia.