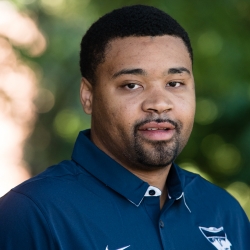 Nick Sales joined the Marietta College men's basketball program as an assistant coach during the 2013-14 season — during that time the Pioneers have gone 72-15 and reached the NCAA Tournament twice.

Sales came to Marietta after spending two years as the assistant coach at his alma mater Defiance College. Sales assisted in all phases of the program, but was responsible for breaking down game film and creating scouting reports on the Yellow Jacket opponents.

Sales began his coaching career during the 2010-11 season on staff at Albion College. During his tenure as an assistant coach with the Britons, Sales served as the head coach of the junior varsity squad and handled recruiting and video exchange responsibilities.

Sales graduated from Defiance in 2010 with a Bachelor of Science Degree in Sport Management and a minor in Recreation. He completed a Master of Arts Degree in Education at Defiance in 2013.

During his four-year career at Defiance, Sales etched his name throughout the record books, racking up 1,383 points, 833 rebounds, 79 blocks and a program-record 60.5 career field goal percentage.

The three-time All-Heartland Collegiate Athletic Conference performer was named HCAC Player of the Year, first team All-Midwest District and All-American as a senior, after leading the Yellow Jackets to a 23-6 campaign, the HCAC Championship and a berth into the NCAA Tournament.