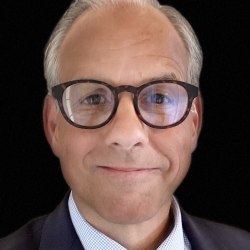 Paul Geisler ’87 was a four-year student athletic trainer who worked with the Marietta College football, baseball, basketball and softball teams. He also rowed crew, played on the club lacrosse team, was a member of Lambda Chi Alpha, and worked as a student tour guide for the Office of Admission. He was a Professor and Director of Athletic Training Education at Ithaca (New York) College for 15 years. Dr. Geisler is currently the Associate Dean of Health Sciences and Professor of Health Professions Education at Simmons University in Boston, Massachusetts.

Dr. Geisler started his athletic training career at the National Center for Sports Medicine in Arlington Virginia, before returning to school at UNC, Chapel Hill, clinical and corporate stops with the HealthSouth Corporation in Orlando, Florida, before entering into academia at Georgia Southern University and earning his doctorate along the way. He was the National Director for HealthSouth Sports Performance and was the owner of SPEC Systems Inc. & KineticGolf before launching his current career in higher education. After seven years at Georgia Southern University, he joined Ithaca College in 2005 as the Athletic Training Director and was promoted to Professor in 2018.

Paul is the author of more than 135 books, papers, chapters, abstracts and professional presentations covering sports medicine and health professions education, including professional lectures in Sweden, Canada, China, Scotland and Ireland. Dr. Geisler serves on the Editorial Board of the Athletic Training Education, Athletic Training and Sports Healthcare journals, and is a manuscript reviewer for the Journal of Athletic Training, the International Journal of Athletic Training and Therapy, and Focus on Health Professions Education (New Zealand). He is currently Chairperson of the NATA’s Educationalist Community and EATA Education Summit Committee, sits on the NATA Executive Council for Education and EATA Research Committee, and has served on the NATA’s Professional Education Committee. He is a member of the Rocky Mountain University of Health Professions Doctoral Program Advisory Board and an Adjunct Research fellow at RMUHP, as well. He is also an active member of both the European Board of Medical Assessors and the Association for Medical Education, Europe. In 2017, Dr. Geisler received the Ithaca College Faculty Excellence Award for his many accomplishments as a teacher, scholar and professional, and in 2019, he was honored by the National Athletic Trainer's Association with the Most Distinguished Athletic Trainer Award for his many years of service and accomplishments. He and his wife, Susan have two grown sons living in Los Angeles and Brooklyn, reside in Lansing, New York.