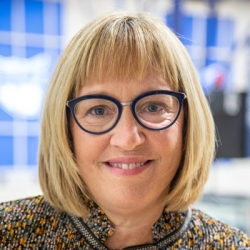 Renée Bailey Gallagher ’84 graduated with two Marietta College diplomas — a Bachelor of Arts in English and a Writing Certificate. Active on campus, she held leadership positions in Sigma Sigma Sigma Sorority and on Panhellenic Council, was an elected SBEB representative, the senior editor of PULSE, and a student tour guide in the Office of Admission.

After graduation, Renee headed to New York City where she reconnected with other MC alums and worked in agency and corporate public relations. In her last position, as publicist and manager for Garfield the Cat’s world-wide syndication and licensing P.R. programs, she worked with more than 250 licensees and 2,000 newspapers on promotional materials; facilitating national campaigns and special events; and creating and implementing multi-year strategic plans.

Renée and her husband, Dan, moved to Lancaster, Pennsylvania, in 1992, to start a family and for her to begin a life of service. As parents of four children; a set of adopted triplets and one biological child, her family celebrates its diversity — from racial and religious to sexual orientation — where inclusivity, acceptance, social equality, and justice are strongly held beliefs and long-fought-for causes. Outside the home, Renée has also been very active in the community — holding leadership roles on numerous civic boards, public and private school committees, and political campaigns.